10 things Obama must do to keep his job 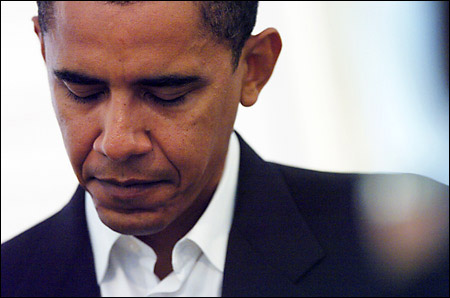 If the president wants to keep his job, he needs to simplify, be fearless, and reconnect, writes Peter W. Cookson.

Washington Post columnist Dana Milbank has declared the Obama presidency “irrelevant” because members of Congress were openly dismissive of the president and his jobs plan.

Our leadership crisis is real. Less than 15 percent of us believe the country is headed in the right direction and only 32 percent of voters think our best days are ahead.

But consider this: If Barack Obama loses in November of 2012, the next president is likely to believe that climate change is a hoax, social security is a ponzi scheme, and that the separation of church and state is so 18th century.

We need to support President Obama; the alternatives are too scary. But the President’s communication style needs to change - now; “strategic ambiguity” isn’t going to win the next election.

In the spirit of support, here are ten things he needs to do to reconnect to the American people:

1. Simplify the Message - your 2008 campaign message of hope and change inspired a nation. If you have to explain everything or draw hazy historical analogies people stop listening.

2. Channel FDR - your role model shouldn’t be Ronald Reagan, but Franklin Roosevelt. FDR cared deeply about the average American, spoke directly to them and created policies they could understand.

3. Go on the Offensive - take it to them. A good offense will beat a good defense nine out of ten times. Thursday was a good start, keep it up.

4. Forget Professor Obama, Find President Obama - philosophers who get in the public arena almost always get knocked out. Leave the finer points to your staff and supporters and stay on message.

5. Be Positive and Down to Earth - trust is the indispensable secret sauce of successful leadership. For people to find you credible, you need to talk with them eye to eye.

6. Look to the Future - be the future, don’t just talk about it.

7. Pay Attention to Those Who Support You - bottom line, to win in November you need the enthusiastic support of your supporters. Don’t let them feel taken for granted.

8. Speak from your Heart and Gut - tempered passion moves hearts and minds. When people can’t find work, thoughtful just isn’t all that reassuring.

10. Forget the Republicans - need I say more? They are not going to play nice, they want your job.

All presidents go through rough times when public opinion runs against them. Some turn it around, some don’t. The most famous case of an incumbent president who had to play the comeback kid to win re-election was Harry Truman in 1948. A Gallup poll that year showed that only 36 percent of people thought Truman was doing a good job. Everyone thought Truman was finished. But Truman knew better.

In his final campaign speech he said: “The smart boys say we can’t win. They tried to bluff us with a propaganda blitz, but we called their bluff, we told the truth. And the people are with us. The tide is rolling. All over the country. I can see it in their faces. The people are going to win this election.”

*Peter W. Cookson is a sociologist and founder of Ideas without Borders in Washington DC. He is the author of Sacred Trust: A Children’s Education Bill of Rights. His website is www.petercookson.com.