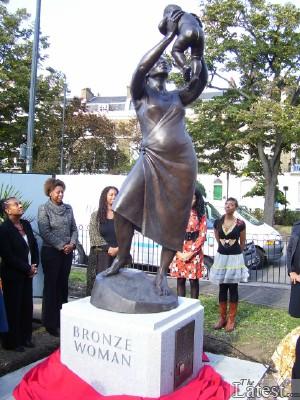 The first public monument to Black women in Britain was unveiled in an historic ceremony which took place in Stockwell Gardens, south London on Wednesday, writes Deborah Hobson.

A large crowd gathered for the event which was complimented by an array of special guests including high profile Black female achievers like Baroness Scotland, the government's Attorney General and the first woman ever to hold the post, political activist and former Lambeth Council leader Linda Bellos and Doreen Lawrence, mother of teenager Stephen Lawrence who was brutally murdered by a group of white racists in 1993.

The Bronze Woman statute (pictured), is a tribute to womanhood and the spirit and courage of Black women in the face of slavery and oppression. It's first public showing marks Black History Month celebrations and the 60th anniversary of the momentous arrival in England of the ship SS Empire Windrush in June 1948. Windrush carried more than 400 ex-servicemen from the Caribbean who were recruited to serve in the British armed forces during the second World War.

Poet, composer and writer CÃ©cile Nobrega was the inspiration behind the monument and is President and Founder of the Bronze Woman Monument project which was established in December 1995. Cecile, 89, was born in Guyana and came to London in 1968. The Bronze Woman is based on a poem of the same title written by her. Aleix Barat and the late Ian Walters, renowned international sculptor, created the awe inspiring work of art.

Former Lambeth council leader Linda Bellos, chair of the committee which made the statue possible, said: "This is dedicated to to all the Caribbean women, African, Asian and Native American, who made Britain's great. Let us remember that the battle for racial equality continues."

Baroness Scotland, the UK's first Black attorney general, said: "The statue represents the indomitable spirit, courage and perseverance of women like my mother and others like her in the diaspora. Be assured that my government department is totally committed to representing Britain's population as it is today through our diversity policies."

Mohni S. Gujral, Chief executive of the Presentation Group and Chair of Olmec, a community investment foundation which supported the campaign for the statue and organised the fundraising said:  "This monument looks back through history to celebrate past lives and forward to the generations to come, prompting them to take pride in their communities and strive to make contributions of their own. This is what public art can achieve, this is why the many years of struggle to erect this evocative monument were worthwhile and why CÃ©cile's personal journey will be remembered".

Racists use Facebook to turn their sights on refugees

Menace To Our Children In Cyberspace

Blazing rows, the place a mess and 'lazy staff'