African journalists have been exploited for too long 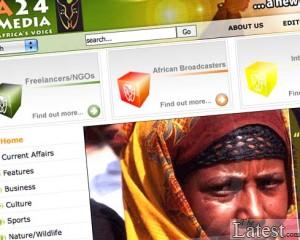 Video news provider A24 Media is small and realistic in its online presence, but has big ambitions. While it might not look much online right now, it's got some solid foundations in place. For starters, it has an editorial board that includes Reuters' new head of global multimedia and a former head of ABC News in Australia.

A24 is a project that really started three years ago for its Kenyan founder Salim Amin. Amin inherited his father's business Camerapix in 1996, and his father's reputation as a photojournalist: Mohamed, or Mo, Amin, was world-renowned for his work, especially for his coverage of the Ethiopian famine.

Amin also has the rights to the largest film archive in the entire continent with 3.5 million films - that's 8,000 hours of footage.

He believes passionately that western agencies have for too long reaped the rewards of African journalists.

"They have been exploited for decades now  — being used by agencies and getting very little for their work," he says.

"Everything we get is negative out of Africa. 99 per cent of the news is genocides, wars, famine, HIV."

"We're not saying those things don't occur or we're going to brush them under the carpet, but what we're saying is there are other things people want to know about. About business, about sport, about music, environment, health …

"Even the negative stuff needs to be done from an African perspective," he says.

"African journalists are not telling those stories  — it's still foreign correspondents being parachuted into the continent to tell those stories. We want to give that opportunity to Africans to come up with their own solutions and tell their own stories."

It started with a dream for the first all-African 24 hour news channel. It hasn't happened yet, but it's still 'very much on the cards', Amin says.

"Obviously it's a huge investment and our criteria is that is has to be independent.

"We need to get a number of investors, rather than one or two people. We've found it increasingly difficult  — the people who have that kind of money always want control of the company."

By launching the online video agency he thinks they will 'get the ball rolling', and get a handle on all the content coming in relating to Africa.

"Then, in a year's time we can tell investors that we've solved one of the biggest problem for a 24 hour news channel  — content."

Then, he says, they can ask for the 'the bricks and mortar' needed 'to build studios and get talent', he says.

In the meantime, the online house is very much built: since its launch last Friday morning there have been 30 stories online to download, and '100 more in the bag'. From next week 'there will be one a day, every day'.

To use the site, either as a broadcaster buying material, or as a freelancer selling content is a 'no brainer,' he says.

"We take material from freelancers, NGOs, African broadcasters, get it back to Nairobi, re-edit it, check it's not propaganda and PR and put it up on the web as agency features.

"It's an agency but with a bit of a twist in that we give 60 per cent to the contributor and we also ensure they keep the copyright. We try to ensure that the African journalist keep copyright and continues to make revenue."

So, he explains, a contributor who has made a film for a small local network can release it to A24 who will sell it four or five more times and reap the rewards of $2,000-3,000.

It's a pay-as-you-go model, which he believes suits the African publishing market, who cannot afford AP or Reuters material.

I ask him whether there's a danger of it becoming East Africa-centric, as its base is in Nairobi.

But while he admits there are a number of the stories currently on the site geared towards East Africa, the site has a database of 1,200 freelancers across 26 African countries.

The agency also has plans to expand into the mobile market, he adds.

While the site is focussed to meet the needs of broadcasters, it's 'open to Joe Public', he says, and there is scope for additional, country-specific information on the site.

Amin stresses that this is not running before walking: he wants to see how the agency pans out before jumping into partnerships with big organisations.

"What we'll have done, is almost like an American Idol type of auditioning of all the best talent on the continent. We'll know exactly who the best contributors are and mould them into a full channel  — as bureaux chiefs, or as correspondents."

Then, maybe, he will start talking to the big players again: he namedrops Google, Youtube, and of course, Reuters, whose global multimedia chief Cramer is a staunch supporter of the venture.

"We asked him if it was a problem," Amin says of the moment when Cramer was offered the Reuters position, "But he told them 'A24  — this is the one board I want to sit on.'"

Amin emphasises that it is not a competition: A24 is not in the same league as Reuters, he says, and is providing different content from other agencies such as GlobalVoices.

It is about partnerships, he says, but however big they grow, he never wants to risk 'losing sight of why we started'.

And that's getting quality African content out there, with the profit being paid back into the pockets of African journalists.

Building a fairer future for all in the UK