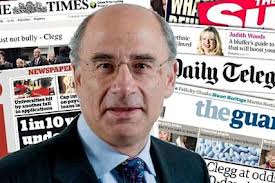 This is the public's first opportunity to tell journalists what they think after the government inquiry that looked at press standards in the wake of the phone hacking scandal. It is a special media conference entitled, After Leveson, is Citizen Journalism the Answer? on Saturday, June 8.

The event, at the London College of Communication, Elephant and Castle, London SE1 6SB, is being hosted by the Citizen journalism Educational Trust and The-Latest.Com, and builds on the success of their Media and the Riots conference that brought young people and journalists face to face. The Leveson Inquiry accepted the conference report as evidence.

Speakers include Karin Askham, School of Media Dean at the London College of Communication, Laurie Penny, the New Statesman columnist, blogger and author, Angela Phillips, of East London Line and Goldsmith’s College, Evan Harris, Associate Director of Hacked Off, James Alan Anslow, ex-News of the World and Sun and university lecturer, Althea Grant, Tottenham community activist and lawyer and Marc Wadsworth, editor of the-latest.com, broadcaster and filmmaker. Bloggers, citizen journalists, scholars, students and consumers of the media will be at the one-day conference.

Following the outcry from Fleet Street’s finest about them not wanting to be regulated by law, the debate has turned to online news and comment. Will bloggers, and sites like our, face draconian fines if lawyers are set loose on them? Or, should they be excluded from new regulation?

After the 2011 summer riots, some police and politicians, aware that young people share a lot of news using social media, urged the closing down of internet services including Twitter and BlackBerry Messenger, during times of civil unrest. Yet the post Leveson Inquiry debate seems to have by-passed discussion that the way forward may not be with “big media”, whose circulations are tumbling, but with alternative reporting by the people for the people in the shape of citizen journalism.

Can newspapers recapture the vast space now occupied by a growing army of online bloggers and other members of the public publishing news, views and images unhindered by the demands of rich, powerful and partisan proprietors? Then again, maybe “big media” need not fear citizen journalism because it is a passing fad unable to uphold professional standards in an unaccountable wild west that is the World Wide Web.

These important questions and more will be discussed in a lively debate by key figures in the media industry. We hope you will join us.