In the US, where hundreds of Black people fall victim to police brutality each year, very few police officers are ever prosecuted or convicted for the violence they inflict on the communities and individuals they are supposed to protect.

While growing calls for defunding, abolishment and total reformation of police continue to fall on deaf ears, in an attempt to ease tensions, authorities sometimes agree to pay millions of dollars in settlements to the families of victims or make superficial changes to the way security forces conduct their business.

The most recent example of this practice is the $12m settlement the city of Louisville, Kentucky agreed to pay to the family of Breonna Taylor, a Black woman shot dead by police in a botched raid on her apartment in March. Louisville Mayor Greg Fischer said the settlement will be accompanied by several policing reforms, such as requiring police commanders to approve search warrants before a judicial approval, drug testing for officers and allowing social workers to assist the police.

None of the three officers that took part in the raid that led to Taylor’s death have been indicted directly for her killing. One of the officers, Brett Hankison, was indicted not for Taylor’s death, but for “wanton endangerment” – endangering the lives of her three neighbours, including a pregnant woman and a child, when he fired ten rounds in Taylor’s apartment. The prosecutor, Kentucky Attorney General Daniel Cameron, said the officers were justified in using force against Taylor and protecting themselves. “Republicans will never turn a blind eye to unjust acts, but neither will we accept an all-out assault on western civilisation,” Cameron, who is Black, said recently at the Republican National Convention as a “proud Republican and supporter of President Donald J Trump.”

Providing monetary compensation to the victims of police violence is undoubtedly necessary. As is the sacking and criminal prosecution of offending officers. And the minor reforms Louisville police agreed to implement can be seen as a step in the right direction. However, these practices – even if they one day become the norm in the handling of cases of police brutality – are akin to placing a bandage on cancer.

Minor policy tweaks, well-meaning, but superficial, reforms, and generous monetary compensation for victims cannot sufficiently reform a system that has its roots in white supremacy and allow communities of colour to live in peace in America.

The first police forces in the US were “slave patrols” formed to surveil Black people and contain Black resistance. These patrols monitored plantations, stopped Black travellers and demanded they produce a permission pass from their “master”, used violence to prevent insurrections and escapes and generally terrorised communities of colour. White men in the South were deputised to serve on these patrols, making the subjugation of Africans and maintenance of white supremacy a community endeavour, motivated by fear and the need to maintain the racial and economic status quo.

During the period of Jim Crow segregation, police and the Ku Klux Klan worked together to terrorise and commit acts of racial violence against African Americans. They not only worked tirelessly and in unison to uphold racist laws and traditions, they also frequently maimed and lynched civil rights activists.

And even today, after the Department of Homeland Security has deemed white supremacists the greatest domestic terror threat to the nation, the line between law enforcement and white supremacy is still worryingly blurry. 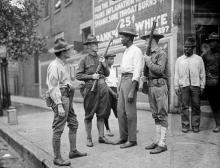 The successors of “slave patrols” are still protective and supportive of white militias and hate groups and they demonstrated these tendencies during this year’s Black Lives Matter protests.

As the Brennan Centre noted in an August 2020 report, few police agencies prohibit white supremacist affiliations, and few officers face disciplinary action for publicly showing support for such groups. Further, there is no federal strategy to identify white supremacist officers. “The harms that armed law enforcement officers affiliated with violent white supremacist and anti-government militia groups can inflict on American society could hardly be overstated,” the Brennan Centre said, noting the threat to people of colour, religious minorities, LGBTQ+ people and anti-racist activists. “Any law enforcement officers associating with these groups should be treated as a matter of urgent concern.”

Some police unions behave like gangs and employ the rhetoric of organised crime syndicates, as they help white supremacist officers evade accountability, resist responsibility and avoid being disciplined for their misconduct.

For example, in New York, a city and a police force that is majority Black and brown, the police union leadership is predominantly white, suburban and supportive of Donald Trump – a president who has supported white nationalists, defended Kyle Rittenhouse and urged police to employ brutal tactics against suspects in custody.

Pat Lynch, the president of the Police Benevolent Association, has called

people of colour “animals” and “mutts”, and has defended brutal officers – such as Daniel Pantaleo, who choked Eric Garner to death in 2014 during an arrest. “Unlike the Democrats, who are running in fear of the mob in the street, President Trump has never apologised for standing up for law and order,” Lynch said in a speech to the Republican National Convention in August, endorsing Trump for re-election. “Unlike the Democrats, who froze in the face of rioting and looting, President Trump gives law enforcement the support and tools to put a stop to it – period, end of story.” The Guardians Association, a Black police union, said the Trump endorsement “undermines every police officer’s ability to remain neutral and nonpartisan in the eyes of the public”. 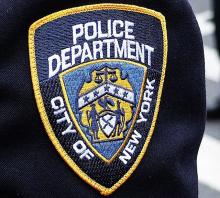 The NYPD defended the use of military-style commemorative coins that call the police precinct in the East Flatbush section of Brooklyn “Fort Jah” – a reference to the Jamaican community that lives in that neighbourhood.

Twitter suspended the account of the Sergeants Benevolent Association after the organisation published the arrest report and personal information of Chiara de Blasio, daughter of New York Mayor Bill de Blasio, after she was taken into custody for protesting.
On a national level, the Fraternal Order of Police (FOP), the largest law enforcement group in the US, supported Trump in 2016, and compiled a wish list for his first 100 days in office. That list included such items as restricting government aid to sanctuary cities and increasing deportations, reversing the federal ban on private prisons and restrictions on police procurement of military equipment, and disregarding Obama-era recommendations for police reform. The FOP also supported a repeal of Obama’s Affordable Care Act, and a reversal of liberalised US-Cuba relations “until such time as the cop-killers harboured there are returned to the US”.

Accompanying racism among police officers is a culture of misogyny, domestic violence and child abuse. The officers who openly brutalise protesters and Black people in police custody beat their spouses and children behind closed doors at an astounding rate. Domestic violence is an epidemic, affecting around 40 percent of law enforcement families, at a rate 15 times greater than the general population.

These inherent problems of policing will not disappear with multimillion-dollar settlements or well-intentioned, yet paltry, reforms that do not confront a system that is not broken and is operating as it was designed. The only solution to this culture of police brutality is to create new institutions with new people and different missions, community-based solutions upholding human dignity and an entirely different approach to public safety.

*David A Love is a Philadelphia based freelance journalist, commentator and media studies professor.