Condemnation of public broadcaster the BBC is mounting about the way in which its TV news presenter Ben Brown interviewed anti-tuition fees protestor Jody McIntyre who was attacked in his wheelchair by police.

McIntyre, 20, who has cerebral palsy, was being interviewed by the BBC after footage emerged on video sharing website YouTube of him being dragged from his wheelchair by officers on two separate occasions at the student fees demonstrations which took place last week in central London.

The UK based organisation Disabled People Against Cuts have said that the BBC interview "fails any kind of civilised standard" and accuses it of disablism and condescension towards McIntyre.

The interview was shown on the BBC News 24 channel on December 13, and Ben Brown appears to be extremely confrontational towards McIntyre, accusing him of provoking officers by throwing objects, wheeling his wheelchair towards police and shouting abuse, despite there being no documented evidence of any of these actions on the footage.

McIntyre responded: “I was not throwing anything at police officers and I was not posing a threat to anyone.”

When questioned about whether he was “wheeling towards officers,” McIntyre said that he was unable to operate his own wheelchair and was being pushed by his younger brother. The footage does not shows that he was threatening police officers in any way. 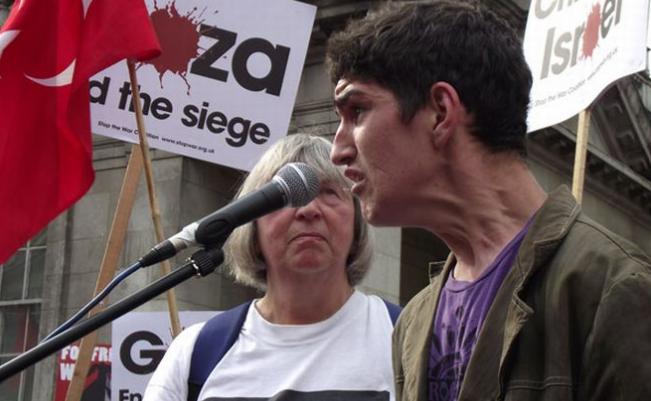 Rather McIntyre suggested that the news media were trying to distract the public from the real cause of the protests; “the rise in tuition fees, which would mean only the elite would be able to attend university.”

Brown also questioned McIntyre several times about why he had not already made an official complaint. McIntyre revealed he was in discussion with lawyers about the right best way to proceed with an official complaint against the police and assured the presenter that one would be made in the “very near future”.

McIntyre also recalled that one student protester Alfie Meadows was in hospital, “within an inch of his life”, after being stuck on the head by a police officer’s truncheon during protests. According to McIntyre he was refused medical assistance and had to undergo emergency brain surgery.

Two protest groups have been set up on the social networking site Facebook in support of McIntyre in the wake of his treatment by the BBC. The groups called "Disgusting treatment of peaceful disabled protester" and "Menacingly rolling towards Ben Brown in my wheelchair" have attracted thousands of followers. They are urging people to lodge official complaints against the BBC.

Under the YouTube video of the BBC interview a lot of viewers express disgust at the way in which McIntyre was interviewed.

One comment reads: “I've complained. It reminds me of the times when the BBC omitted certain things that happened in Northern Ireland and changed the news to show how despicable the nationalists in Northern Ireland were. That abuse of power is ridiculous and thank God for the internet in our modern era so that others can find out for themselves how the world really is.”

Another comment says: “I am a defender of the BBC in general, but his interviewer is desperately trying to find some reason to justify the police's unbelievable brutality towards a disabled person, and is clearly an idiot for doing so.”

And a further comment says: “The BBC are a government funded organisation. What do you expect? They are never going to bite the hand that feeds them. Thankfully Jody was not only able to hold his own but make the interviewer look like as ridiculous as the questions he was posing! Well done Jody... I only hope there are more young activists like you!”

Crude Awakening - a call for mass action to switch off oil