Animal lovers must unite to save Royal Bengal Tigers 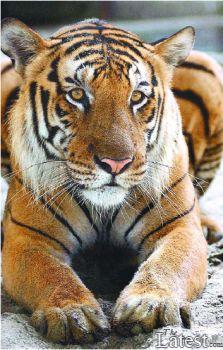 After four painfully tiring days, I am thankfully back home. I went to the Sundarbans near the Indo-Bangladesh border, for my university course project, with all the hopes of a starry eyed post-grad student, only to be given a jolt by the cruel reality of three feet of mud, electricity power cuts, and wolf howls at night, which shook the very foundation of my sensitive soul. Oh, and did I mention mosquitoes almost the size of Dragonflies?

For the uninitiated, the Sundarbans is the largest mangrove reserve forest of the world, and covers almost 60% of India's total mangrove reserve, and of course being the only mangrove tiger land of the world it is the home of the legendary Royal Bengal Tiger. It is the largest inter tidal area, of approximately 26000 sq.km. formed by the meeting of two great rivers, the Ganges and the Brahmaputra. Of this 9600 sq. km. falls on the Indian side, comprising the Indian Sundarbans.

It is also economically important, as the mangroves form the nursery for a number of shellfish and a variety of other fish, which make up the basic food chain of the entire coastal fishing region of eastern India. The mangrove forest also protects Calcutta and it's suburbs from the frequent cyclones of the Bay of Bengal. It has recently been voted as a world heritage site.

Our job was to take photographs of the Sundarban Tiger reserve and the forest areas around it, and to interview the local people about the illegal killing or poaching of the tigers. The population mostly make their living from fishing and honey collecting. It was a lovely place to take pictures too, with it's serene surroundings.

We learnt of the shocking statistics about poaching in the area. In 1900 there were approximately 40,000 tigers, which up to 2001 had been reduced to between 1300 and 1500 according to a state by state census in India. A tiger can be killed with an alarmingly minimal cost to a poacher of less than $9 which covers the price of poison or steel traps.

The poachers are usually native tribals who are well acquainted with the surroundings. Traders pay as little as $15 each to hire 4 poachers to get a tiger skin. Although officially there are anti-poaching laws and penalties, overall it is the   callous approach of the Indian government to this problem that is leading to the extinction of these beautiful beasts. Despite all the laws, to date, only 16 poachers have been arrested. There is an urgent need for something to be done regarding this disaster by the international community of animal lovers or we may only remember the names of the Royal Bengal tigers as we remember the names of Dodo birds, or for that matter Dinosaurs.

Click here to view some of Sumantra's photographs from his visit to the Sundarbans.

How Daddies Are Trading Places

What`s So Great About Being British?