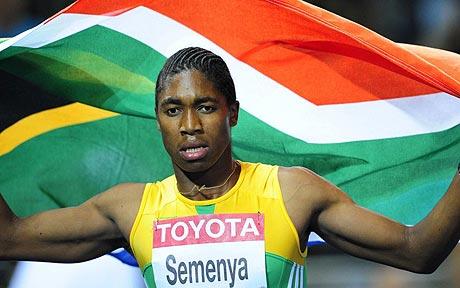 The 19-year-old South African runner Caster Semenya has not run in formal competition since her gender became an issue at last summer's World Athletics Championships in Berlin writes Sophie Taylor.

However, Semenya says she plans to return to athletics this season despite the failure of the International Association of Athletics Federation to clarify her position.

"I hereby publicly announce my return to athletics competitions," Semenya said in a statement which made it clear she had run out of patience with the world athletics' governing body.

Although there is no formal ban or suspension preventing Semenya from competing, it was understood that she had agreed not to race again until the IAAF released the results of tests undertaken to determine the runner's gender.

The 800m runner is clearly frustrated not only by the continued delay but by the IAAF's treatment of her right from the start of this long-running saga. She and her family have insisted that she is a normal girl - if exceptionally strong - but gender tests leaked in September last year allegedly proved she was a hermaphrodite.

"Some of the occurrences leading up to and immediately following the Berlin World Championships have infringed on not only my rights as an athlete," she said in her statement, "but also my fundamental and human rights including my rights to dignity and privacy."

Semenya made it clear that she and her coaching team and lawyers are all prepared to work with the IAAF - but have run up against a brick wall. She said her legal advisers had tried to contact the IAAF three times but didn't get any response about when she could return to competition.

Hence the unilateral decision. "My coach, agent and I will work closely together to identify and prepare for a limited number of athletics meetings over the course of the coming athletics season," she said.