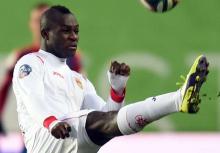 Russian football officials need to do more to combat racism and have so far failed to fully grasp what it means, according to a United Nations official.

Racism in the 2018 World Cup host nation was thrown back into the spotlight on Wednesday when the Russian Football Union (RFU) rejected allegations that Ufa midfielder Emmanuel Frimpong was racially abused by Spartak Moscow supporters.

The Ghanaian said he was subjected to monkey chants during a Russian Premier League season last Friday, where he was sent off after he raised a finger to the crowd in response.

He was subsequently suspended for two Premier League matches.

"I don't think there is a total denial of racism in Russia but there is certainly a lack of understanding by officials in Russia of what racism is," Yuri Boychenko, who heads the Anti-Discrimination Section at the United Nations Human Rights Office of the High Commissioner, told Reuters after a FIFA press conference.

"The authorities here should do more to stop it.

"Too often, officials in Russia only see the problem from their point of view. They do not stand inside the shoes of the victim and see it from his point of view."

During the press conference itself, Boychenko said he believed the authorities were beginning to recognise there was an issue.

"I believe the recognition is coming," he said. "It's a behavioural problem and a societal problem, indeed in Russia there is no clear understanding of what racism means.

"It's not black and white and white and black only; it's about the issue of ethnicities, religious affiliation, culture, language and so forth."

More than 200 acts of racism were committed by Russian fans between 2012 and 2014, according to a recent report by the Sova Centre, a Moscow-based racism-monitoring group.

Piara Power, executive director of Football Against Racism in Europe, said last year that he believed an African team could walk off the pitch during the World Cup if they suffered abuse during a game.

The Ghana Football Association (GFA) has already reacted angrily to the Frimpong incident, saying the player had suffered to "vile" abuse and that it "beats our imagination" that he was penalised.

FIFA announced in May that a new system of match observers would monitor incidents of racism and discrimination at 2018 World Cup qualifiers, however Russian domestic matches do not fall under the jurisdiction.