Once again, the conventional wisdom proved stunningly unwise. Barack Obama was supposed to be on his heels, forced into a back-pedalling, defensive crouch after racially charged remarks by his former pastor, delivered from the pulpit years ago, suddenly became the hottest story of the American presidential campaign. But instead of running away, Obama issued a challenge to those who would exploit the issue of race: Bring it on.

Yesterday morning, in what may be remembered as a landmark speech regardless of who becomes the next president, Obama established new parameters for a dialogue on race in America that might actually lead somewhere - that might break out of the sour stasis of grievance and counter grievance, of insensitivity and hypersensitivity, of mutual mistrust.

"My goal was to try to lift up some truth that people talk about privately but don't always talk about publicly between the races," Obama told me in a telephone interview later in the day. He delivered his speech, titled "A More Perfect Union," in Philadelphia just yards from Independence Hall.

As expected, Obama categorically denounced the incendiary sound bites from the Rev. Jeremiah Wright's sermons that have been played endlessly on cable television in recent days. Wright displayed "a profoundly distorted view of this country," Obama said in his speech, "a view that sees white racism as endemic."

But Obama didn't stop there. He went on to specify what was wrong with Wright's preaching about racism in the United States: "It's that he spoke as if our society was static; as if no progress had been made; as if this country . . . is still irrevocably bound to a tragic past."

The consensus among the commentariat was that Obama, as a matter of political tactics, should want to shift the conversation away from the subject of race as quickly as possible. He told me that the decision not to turn away, but to give a major speech on the issue, was his.

"What was fascinating over the last three or four days was to see how Reverend Wright's admittedly offensive comments . . . were packaged in sound bites in a way that didn't contribute to understanding between Black and white Americans but only expanded the chasm between them," he said. "I thought it was both a challenge and an opportunity to use this moment to describe, to Black and white, why there is this chasm." 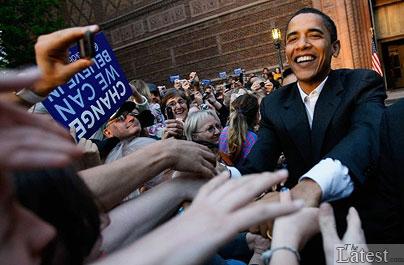 "Most working- and middle-class white Americans don't feel that they have been particularly privileged by their race," Obama said in the speech. "Their experience is the immigrant experience - as far as they're concerned, no one handed them anything, they built it from scratch. . . . So when they are told to bus their children to a school across town; when they hear that an African American is getting an advantage in landing a good job or a spot in a good college . . . when they're told that their fears about crime in urban neighbourhoods are somehow prejudiced, resentment builds over time."

These resentments have "helped shape the political landscape for at least a generation," Obama told his audience. "And yet, to wish away the resentments of white Americans, to label them as misguided or even racist, without recognising they are grounded in legitimate concerns - this too widens the racial divide, and blocks the path to understanding."

Obama called on African Americans to embrace "the burdens of our past without becoming victims of our past," and to take "full responsibility for our own lives." And he's absolutely right.

This amounts to a new set of talking points for a discussion about race: Don't be paralysed by history but acknowledge its effects. Recognise that whites have legitimate grievances that are not racist. Don't cling to victim hood as an all-purpose excuse. Accept personal responsibility.

Obama told me that he doesn't intend to make race a major theme of his campaign. "I don't think that we are going to be gnawing on this bone at every stop," he said. But I believe he might have pulled off something that seemed almost impossible: He not only ventured into the minefield of race and made it back alive, but he also marked a path for the rest of us to follow.

'Why America's prison population is out of control'