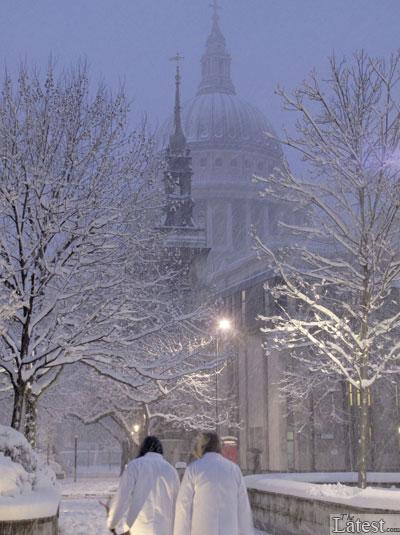 The worst snowfall to hit Britain in 18 years caused travel chaos on the roads and railways, closing scores of schools. All bus services in London were cancelled, as well as dozens of trains, and some airport runways, including both at Heathrow, were temporarily closed.

An army of snow ploughs and gritters were working to clear roads as much of the UK was blanketed in snow.

Helen Chivers, a forecaster with the Met Office, said the last time the UK saw such widespread snowfall was in February 1991. "And we're going to get more," she said. "There are a lot of showers still coming in from the North Sea."

The forecaster added that a large area of sleet and snow showers was also moving out of France and heading to the UK. A spokesman for the Highways Agency said: "If your journey is not essential I would strongly advise you don't make it."

Commuters in the south-east faced a miserable journey to work with chaos on the roads and railways. All London bus services were withdrawn and 10 of the 11 lines on the London Underground were either completely or partly suspended.

A number of train services linking London and the south coast were also delayed or cancelled as snow drifted on to the tracks. Gatwick Airport and London City Airport were both temporarily shut on Sunday night as their runways were de-iced.

Many schools in the south east have closed due to the weather. A spokeswoman for Westminster Council said some of its schools were closed and the weather had forced the closure of more than 50 schools in Kent.

Accolades for CJET and The-Latest from celebrities

Let's take to the street for justice