But does the media giant really see, hear and commit?

It does not square with the politics of multi-billionaire founder and former owner of the television station Rupert Murdoch. He’s been a big supporter of Brexit, racist US president Donald Trump and anti-immigrant campaigner Nigel Farage.

The right-wing media is largely responsible for the disease of racial division over many years. Are we expected to believe it will now provide the antidote?

Admittedly, I was pleasantly surprised at first glance by Sky’s initiative. They have pledged £30million to the BLM cause over three years and the stated aims are as follows. To:

1. Improve Black and minority ethnic representation at all levels within Sky
2. Make a difference in communities impacted by racism
3. Use the power of Sky’s voice and platform to highlight racial injustice

Don’t get me wrong, it’s commendable of Sky. But these are woolly commitments. And regarding the financial package, Arsenal footballer Mesut Ozil alone secured a £55million, three-year contract in 2018. It was mostly funded by TV broadcasting rights money.

It’s hard to gauge the lesser-profile corporate contributions to the cause but maybe cash is not the key ingredient for real change, although obviously not unwelcome.

BLM was founded in 2013 over the racist killing in the US of 17-year-old African American Trayvon Martin in Florida, USA. The movement seemed to lay dormant for several years untii the murder of unarmed Black man George Floyd, aged 47, in the American city of Minneapolis, by a white cop Derek Chauvin, in May of this, year focussed the world’s attention on the movement for months. If not for the bravery of a chance citizen journalist Darnella Frazier, 17, who filmed the incident on her phone, the world would not have known about this latest act of fatal police brutality against a Black person.

Statutes tumbled, flags burned and day after day, for more than two months, there were mass demonstrations, counter-demonstrations and violence. There was also unconscious white resistance to BLM. New Labour Party leader Sir Keir Starmer dismissively described it as a “moment” rather than a movement. Starmer also savaged BLM’s demand to “defund [not abolish] the police” by diverting the public money they receive to instead tackling the social ills that cause crime in the first place. Sounds good to me.

After a backlash, Starmer apologised for his badly-judged “moment” remark. But, the worst thing is that maybe he was right. 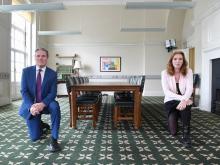 The Labour leader and his deputy Angela Rayner did “take the knee”, a gesture started by American football player Colin Kaepernick, who introduced the gesture during the playing of the US anthem, at a 2016 American football game, as a poignant protest against racism. Kaepernick was condemned by Trump and the talented footballer's career stalled.

I was stunned that six or so Formula 1 drivers shunned the gesture after Mr Floyd’s murder because they didn’t want to be associated with BLM. I’d like to see them being put under a bit of scrutiny by Sky, which puts extraordinary amounts of cash in the pockets of the fat cat racing drivers. 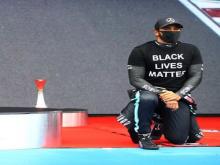 Such scrutiny could make a real difference. That would be real commitment. I’m not saying the drivers should be forced to comply, but I’d like to hear what they have to say about their refusal to follow the example of Black Formula 1 world champion Lewis Hamilton, who asked them to take the knee.

So, what can actually be be done to make Black lives matter? Firstly, we should have a “truth and reconciliation” commission in the UK, as they did in South Africa, as part of the healing process when the Black majority took power in 1994 and ended white supremacist apartheid rule.

And, with education in mind, I was watching a BBC documentary about how BLM has developed this year and the programme featured some shocking statistics: 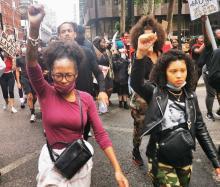 - Police use of force: five times as likely on the Black people with whom they come into contact

- 3.5% people in England are African Caribbean, yet they account for 20% of people who are  tasered by the police

- African Caribbean and Asian people, aged 18-24, are twice as likely to be unemployed

- African Caribbean and Asian people are 14% of the population and 25% of the prison population, as well as 50% of those people held in young offenders detention centres

I’d like to see such statistics pop up during Sky ad breaks. That could be done at little cost, and would create a buzz of discussion and keep BLM in our collective consciousness.

There is also a lot of overlap with the issue of cultural appropriation. For instance, hip-hop has taken over over as the most lucrative multi-billion pound genre in the music industry, just a few decades after it began.

But hip-hop has become so commercialised that the days of it being a political outlet for Black voices are all but over. That is my fear for BLM — it becoming a meaningless corporate brand, which would, sadly, be nothing new.

Hip-hop veteran Ice-T rapped in a 1996 track: “Just being Black is hijacked.”

So, as well as Sky, the wider entertainment industry needs to take responsibility for the corporate BLM brand appropriation in which they’ve been involved, especially because Black people punch above their weight culturally on both sides of the Atlantic.

Hunger Games actor Amandla Stenberg asked: “What would America be like if we loved Black people as much as we love black culture?”

The same question applies to Britain.

* Siddy Shivdasani is a former national newspaper journalist and the author of the auto-biographical book Melting Pothead: Stories of an Anglo-Indian raised on Brixton’s Frontline. Website: meltingpothead.com