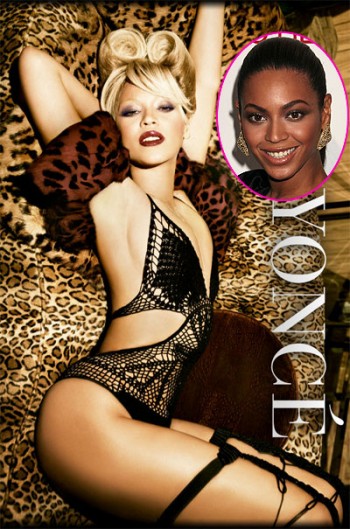 Black American R & B chart-topper Beyoncé has been criticised in the past for turning her back on her African-American heritage.

Pale-skinned photos from her latest album cover, which make her almost unrecognisable, are sure to add fuel to the fire.

The controversial images are being used to re-promote the 30-year-old performer’s fourth album, 4, and show the new mum splayed out on a leopard-print rug dressed in a sexy crocheted body suit that shows off her surprisingly pale skin and platinum blonde hair.

It's not the first time that the Grammy award winning singer has been accused of lightening her look.

A 2008 L'Oreal advertisement that showed her with pale skin and strawberry blonde hair was accused of being unnaturally white-washed.

Born in Texas to an African-American father and a mixed race mother, Beyoncé appears almost Caucasian in the music video for her latest song, Countdown.

The former lead singer of girl group Destiny's Child is married to multi- millionaire rapper Jay-Z and gave birth to daughter Blue Ivy earlier this month. This took place in a swanky suite at the Lennox Hill hospital in New York, US that cost over $800 a night and RadarOnline.com exclusively revealed that the power couple made a six figure donation to the hospital just months before.

9/11 Inquiry Must Be Re-Opened

African ancestry of the royals