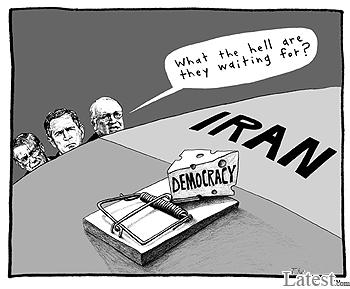 An assessment of mainstream media coverage of the American mid-term elections (see The-Latest story US Elections: Bush whacked and women gain), reveals that bloggers were the other victors on the day because they were instrumental in shaping the news agenda.

Conservative journal redstate.com commented on  "massive meltdown in Pennsylvania" early on election day and cited  "widespread reports of an electoral nightmare shaping up in Pennsylvania with certain types of electronic voting machines". RedState's main blogger, Erick Erickson included a report of poll watcher intimidation in Philadelphia, along with a link to a video on YouTube that appeared to show a certified poll observer, with a video camera, being blocked from a polling station. www.youtube.com.

Jonathan Zittrain, a professor of Internet Governance at Oxford University and a co-founder of the Berkman Centre for Internet and Society at Harvard describes the blog as a  "boon to the democratic process". He states that  "the blog now has a firm place in the choreography of national events and in elections perhaps more so than in any other cultural exercise".

Widespread speculation in the US that their mid-term election results/numbers could leak in the blogs, only confirms the elevated status of the blogger.

Here, The-Latest takes a brief look at US citizen opinion on the elections as expressed on the web:

Charles Lai
"As much as Gates' links to Iran-Contra might taint his background, I think it's the best change we could ask for at the moment with George Bush in power. Have you read the Slate article on Gates yet?. Rumsfeld was so bad in so many ways. Gates as a replacement will lead to more sensible decisions regarding our nation's defence and Iraq".

Ian
While Gates might be very competent, when you learn more about the Contras (Wikipedia) you have to wonder about the ethics of anyone involved with Iran-Contra. Anyone who is concerned about the disregard Rumsfeld has shown for justice and human rights in Iraq can probably expect more of the same from Gates, though maybe as a more competent leader he'll be more careful that only our proxies in the Middle East do the torturing on our behalf".

Fallingtree
How many times yesterday did Bush say he was going to reach across the aisle to work the the "Democrat Party"?

It's the Democratic Party. Republicans started calling it the "Democrat Party" to remove the positive connotation of the word "democratic" from the party name.

It's a lowball Republican tactic that shows his real priority: putting politics ahead of the good of the country.

I suggest Bush simply call himself a liar. At least then we'd know he was telling the truth".

Isbister
Aside from George Bush the first, isn't Gates the only other living human being with the claim of being most responsible for the blowback America now faces? This guy was neck deep involved in:
-Arming bin Laden & the USSR fighting Afghanis
-Iran Contra
-Iraqgate
-Missing Saddam's Nuke program
-Missing the formation of al Qaeda
-Missing Saddam's Kuwaiti invasion
-Failing to detect the first WTC Bombing plot
What a fantastic choice. Did George W.  "Everything I Touch Turns to Crap" pick this guy himself? Do we really need a Sec.of Defence? Can't we hold off for the next couple of years until we can get an adult into the Presidency?

Motherjones Washington Bureau
The tide may be turning, but in light of the increased popularity of Botox, women in American politics will likely have to contend with speculations on their appearances. Both Sen. Clinton and Rep. Nancy Pelosi have been alleged to have undergone plastic surgery, and have undergone some fashion criticism from the press. Most recently, the Guardian described Pelosi as "an Armani clad...left winger of the caricaturists' dreams."

Egypt, revolution and the rise of the digital generation