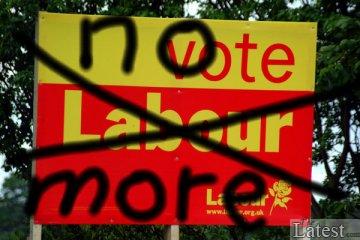 Prime minister Gordon Brown botched it when he used YouTube to make an ill-fated announcement about Sleazegate MPs' expenses. More internet-savvy Labour bloggers have been online venting their spleen on the embattled party leadership. Here's a selection of their comments..

The circular contained a number of additional items:

Raffle tickets: coded message about the past management of the economy?

Gordon Brown  "Help and hope for the future": hmmm.

What can Labour learn from Obama? from the Fabian Society: Not at lot, given they are probably in a worse position than the Republicans were in.

A few days later I received a letter informing me that my membership fee is going up. It is not going up a great deal, but it's the one item of expenditure on my bank account statements which brings forward comments from my partner.  "Why are we paying money to this lot?" is usually followed by comments about second homes, stone sinks, porn, the state of the economy, and the government. My standard response  "Well, one reason for staying in is that you can at least help prevent the worst elements of the Labour Party gaining control, because they'd be an absolute disaster" is cutting less and less ice, largely because my partner thinks Labour will be out of power for at least two terms.

My worst fears have come true, absolutely nothing for the ordinary working person in the street. The tax system remains unequal, again tinkering around with top earners who always find ways to avoid it or pass it on in so many ways and anyway it's not until next year, but whatever crumbs come from this table why was it not used to sort out those on lower incomes to take them out of the tax system altogether instead of it being lost in the treasury coffers paying back the debt. Boasting in party leaflets that working people got extra tax refund money in their pay packets really stinks when it was money taken off them with the 10p fiasco last year and not everyone has been fully compensated anyway - what a mess! Whatever happened to sorting out the utility companies charging their high prices absolutely nothing in this budget?

What about hitting all the spivs, speculators ad filthy rich bankers who got us into this mess, we come over as if we are in their pockets to afraid to upset them and their establishment friends in the city, yet we are quite ok about taking ordinary tax payers money to bail them out. Will we ever find out what happened to that money, will they be accountable for it, will they have to reach targets and outputs, if not will it be clawed back? Yet at the same time we are quite happy penalising ordinary people again and again with beer going up 5p, petrol, ciggies shall I go on?

Is it no wonder branch and constituency meetings are so poorly attended and that membership is at rock bottom whatever happened to our core values and beliefs and fighting for a better more decent society for ordinary people. Labour needs a root and branch change at every level starting with removing the present leader and the people around him who are the most inept lot we have ever had, is it any wonder we are so far behind in the polls!

Yet at the same time both locally and nationally we have a Tory party who also rank as hopeless and some of the worst that party has ever had, but they don't have to do anything because we are doing their campaigning for them with our disastrous policies all they have to do is sit back and say vote for us we are the only ones that can remove them and we will put it all right. I despair!

I do talk to people of all ages and incomes. My wifes a pensioner not yet 65 so is one of those not "fully" compensated but it amounts to less than  £1 per week after the extra heating allowance was given. I have a number of nephews and nieces on low pay non of them moan about not being "fully" compensated by about 50p per week. Do you know what they moan about it is not the tax or nic's but what they see as lazy idle gits complaining its hurting us.

We should be fighting for a decent equal fair society, on the basis of making work pay not rewarding idleness. Pick up the crumbs, I dont see real poverty today. I remember poverty not like it is now. The reason Labour was created was to allow workers to benifit from the fruits of their labour, not rewarding others to benifit from others long hours at work. The Tories will walk it if we forget the workers in favour of the shirkers.

As much as I acknowledge the flaws Gordon Brown has, I dont think he is personally responsible for the position of the party, although I accept he has to take the flak for it.

In my opinion any leader is far too busy to be in touch with public opinion so they have to rely on their cabinet and advisors to be kept up to date and in tune with public opinion. So in my opinion, our problems will only begin to disappear when there are some drastic changes to what is a weak cabinet and out of touch advisors, who are so to speak leading both Gordon Brown and the party up the garden path.

I think the main cause is a drip drip disconnection with rank and file members to a point where the leadership are driven by hand selected policy forums etc and have become practically divorced from the party activists and members and more so the general public.

Even if we change leaders, we would still have an out of touch structure within the party and would have similar problems in the future once a new leader sets in.''

So in my opinion, if we are to get anywhere near our true potential, then there has to be some radical re-thinking over the structure of the party i.e root and branch reform, driven by the members and not the leaders? How to do it I do not know, but if it doesn't happen then I fear we are stuck in a position where we cant improve and people in influential positions within the party will be part of the problem and secure their own positions as opposed to being part of the solution?

How mobile phones can make world a better place

Nervy first meeting with your in-laws-to-be