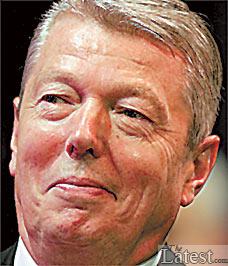 Health Secretary Alan Johnson prompted loud laughter when he cracked ribald jokes at a fund-raising gala dinner held by supporters of the woman who beat him for the post of Labour Party deputy leader.

Pushy Harriet Harman, MP for Camberwell and Peckham in south London, narrowly won what Johnson dubbed "Labour's X-Factor" contest in June last year. "I always said I was the best man for the job," quipped ex-postman and former trade union leader Johnson, "but I faced a better woman."

The greatest guffaws came when the Cabinet minister, tipped to replace prime minister Gordon Brown should there be a Labour leadership challenge, talked about two words he had found in the Oxford English Dictionary - "apricity" and "unbepissed". Apricity was "the feeling of sunshine on your face in winter", something Labour and its leader Gordon Brown had been experiencing with its improved polls ratings. It proved, said Johnson, that "in terms of policy and the ability to take this country through difficult times, Gordon's the man".

Warming to his theme in front of diners, at a trendy Camberwell Green Italian restaurant Mozarella E Pomodoro, who included Harman and her trade union leader husband, Jack Dromey, Johnson added: "Another word, and those of a delicate disposition please excuse me but it goes back to medieval times, is 'unbepissed'. Imagine, in 1312, as everyone threw their slops out of the window, if you got to the end of the road unbepissed it meant not being urinated on. I want the leadership of the (Labour) party to remain unbepissed."

"We've had the apricity. You know, what we need to do now, having seen our fortunes change - not yet to the degree that we need in order to win the fourth term. No one has ever won a fourth term except the Tories under John Major. It is always difficult if a party is to do that. But to get to that level now we have to take the enormous boost to our morale, forget the mea culpa (blame game), stand up heads high, proud to be Labour Party members, proud of our record."

He bemoaned what he described as a big health improvement under Labour that had gone unreported in the press. According to a report from the World Health Organisation, Britain now had more psychiatrists and more mental health workers per head of population, than any other country in Europe and the lowest suicide rate since 1861.

Johnson said the Labour Party should be proud of "what we will do; our vision for the future and then we really can make the 21st century the century of the progressive left, just as the 20th century, with some interludes, was the century of the depressive right".

<p><strong><u>Chris Gaynor</u></strong></p> When Gordon Brown gets the boot, who will replace him? It really will be an interesting leadership contest as there are so many who would be itching to get their hands on the top prize....