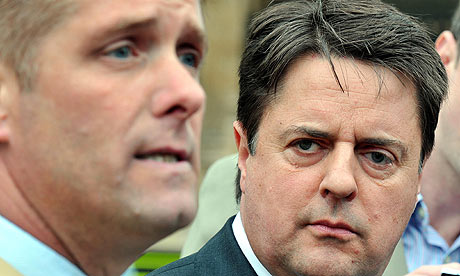 Nick Griffin, leader of the fascist British National Party (BNP) threatened to ditch the party’s sole London Assembly member last year if he stood in the way of Griffin being the BNP’s Parliamentary candidate for Barking in the general election, it has been revealed.

Richard Barnbrook, who was also a BNP councillor in Barking and Dagenham, felt it was his right to stand in what the BNP thought its most winnable constituency, but many in the BNP leadership were concerned at his dismal performances in the London Assembly, his tendency to make “factual errors” that led to appearances in front of council Standards Committees, and his alcoholism that was at the root of all his other problems.

According to Eddy Butler, who failed in his attempt to oust Griffin as BNP leader this summer and has since been expelled from the BNP, it had been agreed in the party that Griffin should not be the Barking candidate as he would look like a carpet-bagger. Instead, the day after Griffin’s Question Time debacle, Griffin went on a walkabout in Thurrock and announced his commitment to standing for Parliament there.

Butler had the job of persuading Barnbrook to stand down, after Barnbrook had already put up billboards in the constituency stating “Barnbrook for Barking”. Barnbrook told Griffin he would not stand down in favour of any lesser candidate than Griffin himself, but apparently prevaricated. So Griffin composed a long press release detailing Barnbrook’s shortcomings, which he threatened to release if Barnbrook did not back down.

The blackmail had the desired effect. According to Butler: “On 14th November in front of the media and a room full of members, Nick Griffin with his faithful onion at the ready, put on one of his stock weepy performances … as he shamelessly announced that Richard Barnbrook, had voluntarily stepped aside to allow Nick Griffin to contest Barking!”

The rest is history. Griffin polled abysmally and Barnbrook, who had been promised the leadership of Barking and Dagenham council, lost his council seat, as did all the other BNP councillors. Clive Jefferson, the BNP’s moronic national elections officer (among several other party positions), persuaded Barnbrook to act as a stalking horse candidate to thwart Butler’s challenge to Griffin’s leadership. Eventually at the end of August Barnbrook showed that despite his “weaknesses” he still had some principles and resigned the BNP whip in the London Assembly until Griffin’s financial mismanagement of the BNP had been tackled. He now sits as an independent and has not updated his blog since that day.

As for the press release, it shows, in case anyone doubted it, the lengths to which Griffin will go to get what he wants, even if it damages his own party. It is reproduced it in its entirety (below) so that readers can gain an insight into both the character of Griffin and – as we have no reason to believe the details in it are untrue – the way Barnbrook has represented those who voted him into the London Assembly.

It is with regret that the British National Party announces the withdrawal of the party whip from Richard Barnbrook, up until now a BNP councillor in Barking and the party s sole Member on the Greater London Assembly.

We are aware that sections of the media will use this as a stick to beat the BNP, and have worked hard to persuade Mr Barnbrook to make the changes to his lifestyle and attitudes which could have avoided this outcome. In the end, however, the party’s short term political convenience has to be put second behind the interests of our voters and the long term need to maintain our reputation for honesty and competence.

We are therefore unable any longer to allow our voters and our members to be abused and let down by a man who, after so much early promise, has let everyone down so badly.

In itself, Richard`s refusal to seek treatment for his alcohol dependency would be his personal problem and tragedy, but this illness is now having a catastrophic impact on Barnbrook the elected politician. The main, but not the only, problems that result are

* His increasingly erratic and poor attendance record at the GLA

* His failure to perform his constituency duties, cancelling meetings without warning or valid excuse. The final straw in this regard was his recent decision to go on an Internet blind date rather than take up a request to attend the funeral of a young victim of the London knife crime epidemic on which he was so active when first elected

* His attending meetings and disciplinary hearings, and giving interviews while drunk

* His ignoring repeated warnings and pleas from colleagues not to drink and drive. We make this a matter of public record here in the hope that the resulting possibility of greater police scrutiny will compel him to revert to travelling by public transport and thereby prevent a serious accident that is at present just a matter of time

* His breaking of his personal pledge to give 10 % of his gross salary to the party, giving instead irregular smaller amounts and repeatedly refusing to provide copies of his council pay slip so as to allow a proper assessment of the resulting shortfall

* His underhand efforts to secure BNP staff time and donors' money for his proposed Independent parliamentary campaign by claiming that this is authorised by the party leadership.

* His insistence on acting as an unofficial spokesperson on television and radio. His two most recent performances after his disciplinary hearing and also following Question Time in themselves make it clear that Richard, for all his qualities, would be wholly unsuitable to represent the Party in the highest level of government in Britain and the most demanding debating chamber in the world.

A number of meetings have been held between Mr Barnbrook and members of the BNP leadership in an effort to resolve these and other problems, but it has been impossible to reach a satisfactory outcome. As a result, Richard Barnbrook's status as a BNP councillor and London Assembly Member is revoked with immediate effect. This decision is reversible if he responds to this sacking by seeking and accepting professional help to deal with his alcohol problem, which is clearly the root of all the failings outlined. But failing that he will not be standing as a BNP candidate in any elections for the foreseeable future.

Our council group in Barking and Dagenham will be reduced by one, but will continue to be led by councillor Robert Bailey. The two BNP members who are at present working for Mr Barnbrook in the GLA have been informed that it is entirely their own decision as to whether to continue in post should he wish to retain them. As far as we are concerned it is now no different to any civil service job and we wish them well.

We will be announcing our prospective candidate for the Barking constituency following a selection procedure in which Mr Barnbrook will not be considered. We will be going all out to unseat Margaret Hodge and to replace her with a loyal, competent British National Party MP who will serve the electors of Barking with the dedication they deserve.

*Sonja Gable writes for the Hope not hate news website.