Bush crimes continue and he's caught out at last 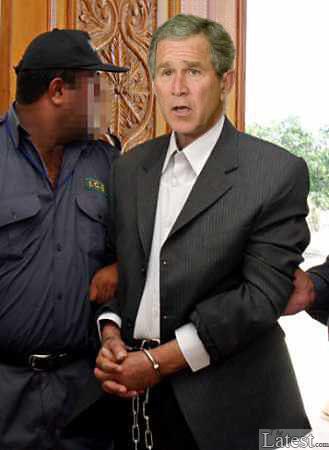 George W. Bush famously said: "They misunderestimated me." His ungrammatical statements induce sneers and snickers, but convey powerful truths. After stealing the 2000 election, violating international law, trampling on the Constitution, and emptying the treasury to profit his pirate friends, Bush will go down in history as one of the most successful US presidents.

Because of the constant collusion of the supine Democratic Party, he has achieved nearly all of his goals in domestic and foreign policy. It is not surprising that the Bush doctrine credo, "I'm the decider," has gone unchecked at the eleventh hour.

The United States attack on the Syrian town of Sukkariyah is a case in point. Syria reported that eight people, including children, were killed in a United States Special Forces raid in that country. Unnamed military sources claimed that the target of the attack was Abu Ghadiyah, an alleged al-Qaeda "insurgent" responsible for attacks in Iraq. Those sources claimed that Ghadiyah was killed after a battle between U.S. Special Forces and members of his alleged cell. The anonymous sources made vague statements about "taking matters into our own hands."

The strike has all the tell tale signs of standard Bushite policy. Syria and the United States are not at war and Congress has not given approval for any military action against that nation. The strike was carried out from Iraq, a formerly independent nation now under Unites States occupation. Despite Iraq's humiliating circumstances, the Bush administration hopes to sign a Status of Forces Agreement (SOFA), which will determine how long American troops can remain in Iraq. Bush is in a race against time to get an agreement before the December 31st expiration of the United Nations mandate that allows U.S. forces to remain.

Iraqi president Nouri al-Maliki is holding out for an agreement that would send all American troops out of his country by 2011. Maliki is also under immense pressure from within his own country and from Iran not to sign an agreement at all. The Bush administration would seem to be undercutting itself by using Iraq to stage an attack against Syria and make life difficult for Maliki, but there is always a twisted logic which explains Bush administration actions.

The Bush regime does not want states or individuals they demonise to start looking good to anyone else. Syria's foreign minister was on the verge of attending a diplomatic meeting in London. The Syrians were improving relations with other European nations, Lebanon and even with Israel by using Turkey as a go between. They must have been making headway, because an important part of the Bush doctrine is to make certain that nations labelled as enemies stay that way. If Syria is welcomed into the world community, then its ally Iran might be as well. It would then be more difficult to find a pretext for waging full scale war against either nation, or a Bush and Cheney dream would be unfulfilled.

Bush took similar action earlier this year against Venezuela. When Venezuelan president Hugo Chavez was on the verge of freeing hostages held by Colombian FARC rebels, the Bush administration pressed Colombia to attack FARC in Ecuador, violating that nation's borders and in the process nearly starting a war between the three South American nations. The events in Syria belong in the same category of making certain that enemies not become friends.

The world is in as much danger from the Bush regime now as it has been for the past eight years. Barack Obama/Joseph Biden transition plans will get all the attention, and George W. Bush/Dick Cheney will be figuring out how to keep their legacy alive. While we are told to pay attention to new cabinet appointments and every nuance of transition team activity, the Bush doctrine will morph into the Obama doctrine. Obama's objections to Bush policy are about little more than management style. Obama is opposed to "dumb" wars, but not to all of them. He concedes that the Iraq occupation belongs in the dumb category, but he doesn't intend to end it.

Maliki's desire to get American troops out of his country are in conflict with Obama's plan that would keep troops in Iraq. "Under the Obama-Biden plan, a residual force will remain in Iraq and in the region to conduct targeted counter-terrorism missions against al Qaeda in Iraq and to protect American diplomatic and civilian personnel."

The strike on Syrian territory fits well within Obama's category of "targeted counter-terrorism missions." No wonder Joseph Biden rants hysterically about upcoming crises around the world and the need for Democrats to shut up and go along with the new administration's plans.

Obama's acceptance of Bush war crimes would not be tolerated on a playground. "He started it," is a child's plea routinely ignored by responsible adults. American presidents are very lucky. They get more leeway than children having temper tantrums.

Conspiracy theories? No one does them better than the West

Why aren't Black deaths in custody an election issue?