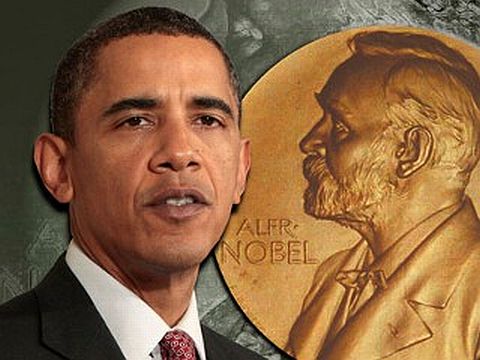 Never in living memory has a Noble Peace Prize recipient gone on to cause more death and misery than Barack Obama​who now puts hits on US citizens, writes Margaret Kimberley.

His foreign policy “successes,” as rated by his supporters, all involve assassinations – he is The Assassinator. Moammar Gaddfi is a singular victim, but so are thousands of Black Libyans and migrants. His killer drones operate in at least six countries, and his Special Forces in more than 75. Meanwhile, WikiLeak’s Julian Assange​, who revealed US global crimes, “probably faces a future extradition to the United States when he ought to be honored by the world community.” The whole nation of Norway should be mortified.

“The president has presided over one of the most violent eras in the recent history of American international relations.”

Every year the Norwegian Nobel Committee bestows its peace prize on esteemed persons and organisations who, “shall have done the most or the best work for fraternity between nations, the abolition or reduction of standing armies and for the holding and promotion of peace congresses.” In general, recipients are deserving of the honour, with such luminaries as Dr Martin Luther King​ and organisations such as Doctors Without Borders among the long list of laureates.

Occasionally however, the committee has a lot to answer for, as was the case when Henry Kissinger​ was the prize recipient in 1973. He was honoured for his role in the negotiations which ended the Vietnam war, but by that time Kissinger’s actions as National Security Adviser and then Secretary of State had caused the deaths of over one million people in Southeast Asia.

Two years ago, true peace makers were dismayed to learn that Barack Obama was named the 2009 peace prize winner. Giddy at the site of a Black man becoming president of the United States, the prize nominators lost any collective wisdom they may have had and awarded the prize for peace to the man who oversees a war machine larger than that of the rest of the nations of the world combined and he has subsequently proven that he has no qualms about utilising it.

Obama did not disappoint the people around the world who were mystified by the choice. In his award speech he essentially said that he should not have been the person receiving the medal on that day. The unworthy winner spent most of his speech talking about the need for war. Orwell’s words, “War is peace,” were prescient.

“The prize nominators lost any collective wisdom they may have had and awarded the prize for peace to the man who oversees a war machine larger than that of the rest of the nations of the world combined.”

If the Norwegian committee wasn’t listening to critics in 2009, they ought to be questioning their decision now. In 2011 alone, Obama ordered the death of Osama bin Laden without any intention of capturing and trying him. Anwar al-Awlaki, an American citizen, was never given the due process to which he was entitled, but US drones killed him as surely as the Navy SEALS killed bin Laden. 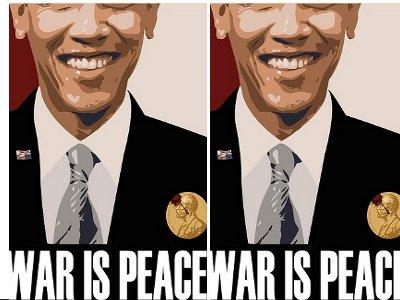 The president’s killing spree didn’t end with the elder al-Awlaki. His sixteen year old son, Abdulrahman al-Awlaki, also an American citizen, was obliterated by a drone just two weeks after his father’s death. Obama claims to have the right to kill American citizens based on secretly drawn up criteria which aside from strategic placed leaks to the media, have not been publicly divulged.

With these killings fresh in the world’s consciousness, the horrific end of Muammar Gaddafi​ was seen the world over. For those with the stomach to watch, videos of his killing and then his dead, mutilated body were viewed all over the world. His end did not come directly at the hands of the United States, but Barack Obama and his NATO allies were surely responsible.

They took it upon themselves to decide the fate of an entire nation, and overthrew one government in favour of another. In the process Libyans were subjected to sanctions and bombing incursions which killed an unknown number of them. Both Black Libyans and migrants from other African nation were the targets of lynch mob violence at the hands of the “rebels” supported by Barack Obama.

There are many other examples of the peace prize laureate’s not so peaceful ways. From lies and threats against Iran to ever escalating wars of terror in Somalia and Pakistan, the president has presided over one of the most violent eras in the recent history of American international relations.

“Obama claims to have the right to kill American citizens based on secretly drawn up criteria which aside from strategic placed leaks to the media, have not been publicly divulged.”

The Norwegian committee does not have a mechanism to withdraw an award once it is given, but they should seriously consider doing so. If they are truly people of conscience, they must know that they violated the ethos upon which the prize was based when Obama’s name topped the list of nominees.

It is true that combat troops are due to leave Iraq by the end of this year, but only because of an agreement requiring the withdrawal which was signed by George W Bush. The withdrawal also comes after eight years of terror inflicted upon the Iraqis, and neither man deserves credit for undoing what ought never to have taken place.

When the Obama worshippers try to make the case for their useless paeans of praise, it must be pointed out that the Iraqis refused to give the United States military immunity to commit more crimes. The false idol wanted to keep more troops and allow them to continue doing as they pleased, namely killing Iraqis on the flimsiest of whims.

It is curious that people who have genuinely suffered for peace like Mordechai Vanunu​ have never been honoured. Vanunu confirmed that Israel has a secret nuclear stockpile, and that government imprisoned him for eighteen years and continues to keep him under house arrest seven years after his release. Julian Assange and Wikileaks revealed that Iraqi civilians were slaughtered by American troops and that our government told numerous lies to cover up these atrocities. Assange probably faces a future extradition to the United States when he ought to be honoured by the world community.

The committee needs to do some serious soul searching and then do what they have never done before. They must inform the president of the United States that he has to return a medal he was given in Oslo in 2009.

Norway, take back that prize!

*Margaret Kimberley is Editor and Senior Columnist at online journal Black Agenda Report. Kimberley lives in New York City, and can be reached via e-Mail at Margaret.Kimberley(at)BlackAgandaReport.com.

Iranians 'are the new outcasts in the UK'