Cameron takes over as prime minister after Brown quits 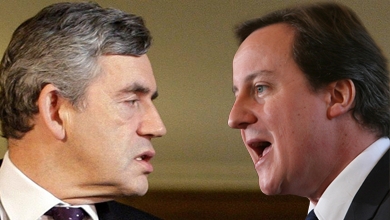 David Cameron, the Conservative party leader, became the UK’s prime minister this evening and announced the formation of a coalition government, capping a day of political negotiations that ended with the Tories returning to power after 13 years in the opposition.

Speaking outside the prime minister’s office at 10 Downing Street, Cameron said his Conservative party, which failed to win an outright majority in last week’s elections, would form a coalition with the centre-left Liberal Democrats - a potentially fraught arrangement that Cameron admitted could pose “all sorts of challenges.”

But, he said, the arrangement would provide the “strong, the stable, the good and decent government that we need so badly.”

Five days of wrangling and political stalemate that followed the UK’s parliamentary elections wrapped up with remarkable speed on today, with Cameron entering 10 Downing Street just a few hours after his predecessor, Gordon Brown, exited.

Brown announced his resignation after a last-ditch effort to keep his Labour party in power faltered, saying that “I have always strived to serve, to do my best in the in the interest of Britain, its values and its people. Thank you, and good-bye.”

Then, with his wife and two sons, he made his way to a blue Jaguar that ushered him to Buckingham Palace, where he offered his resignation to the Queen, a necessary if largely pro forma step in the change of power.

Cameron arrived at the palace shortly after to accept the queen’s traditional invitation to the incoming prime minister to form a new government. But many details about the shape of that government remained unclear, including what role Liberal Democrats would play in the cabinet.

Although the Conservatives won the most seats in last week’s elections, they fell short of securing an outright majority in Parliament and had been talking with members of the Liberal Democrats about forming a governing coalition.

A five-hour meeting between Conservatives and Liberal Democrats, who came in third in the elections, ended today with no announcement of a deal. William Hague, shadow foreign secretary, emerged from talks without giving any details of the negotiations, saying he and his colleagues were on their way to see Cameron.

Fifteen minutes after Brown arrived to meet the Queen, he emerged from the palace, climbed back into the Jaguar and was driven away.

The events ended the political stalemate that ensued after Britain’s most closely watched elections in years left control of Parliament split among the Conservatives, Labour and Liberal Democrats.

Brown had opened talks with Liberal Democrats on Monday in a last-ditch effort to keep Parliament in Labour’s hands, but those negotiations appeared to fall apart, precipitating his resignation.

A morning meeting between a high-level Labour team and negotiators for the Liberal Democrats ended without any announcement of plans to meet again, with some Labour insiders saying the talks had not gone well and that the Brown initiative announced on Monday afternoon was at an end.

As Labour hopes of staying in government faded, Conservative spirits rose. David Cameron, met again with Clegg, and drove after lunch to the Conservative party’s London headquarters to meet with party workers. Having begun the day with grim-faced demand that the Liberal Democrats make up their minds about their coalition partners quickly, Cameron appeared cheerful, and left the party headquarters smiling, but refusing to make any comment to reporters.

Although a Liberal Democrat revolt against any deal with the Conservatives that prompted Clegg to seek formal talks with Labour on Monday appeared to be fading, few analysts had expected the transfer of power to Cameron to take place before Wednesday, or possibly even Thursday.

Two factors appeared to have put an end to prospects of Labour being able to scuttle the progress that the Liberal Democrats and the Conservatives had reported over four days of talks about a pact that would make Cameron prime minister. One was the failure of negotiators for Labour and the Liberal Democrats to make a breakthrough in their talks. Ed Miliband, a Labour cabinet minister, looked glum when he emerged from the talks at lunchtime, but spoke of a “a good constructive basis” for an agreement. However, Labour spokesmen said more quietly that the two sides were far apart.

What appeared decisive, however, was the increasing political isolation of Brown. In three years as prime minister, he has faced down a succession of party revolts, vowing to remain in office to complete what he has presented as a personal mission of guiding the British economy back to a sustained recovery after the country’s worst recession since the 1930’s. But this time, he appeared to have run out of road, with even loyalists who stood by him in previous party upheavals. They appear to have concluded that Mr. Brown’s plan to play godfather to a Labour-Liberal Democrat pact, remaining prime minister until a new Labour leader could take over in the fall, would not fly.

Peter Mandelson, who led the morning’s talks with the Liberal Democrats, left the ministerial meeting at Downing Street grim-faced and tight-lipped, saying nothing; he, more than any other Labour figure, has been crucial to Brown’s survival in the past. He was one of the architects of the “New Labour” movement that won Tony Blair a landslide election victory in 1997, and opened the way for three successive Labour election victories.

Brown and Blair spent much of their 10 years together in government, until Blair was forced out by internal Labour dissent over the Iraq war in 2007. The two were then in a state approaching estrangement. So it was no surprise that Brown, in the 24 hours after making his bid for a Labour-Liberal Democrat pact on Monday, found that his remaining political allies were mainly members of the group that had formed around him during the Blair years.

Labour heavy-hitters who emerged as opponents of the Brown plan were mainly, though not exclusively, old loyalists of Blair. Andy Burnham, whose ministerial career was accelerated by Brown, was the first of his cabinet loyalists to break ranks, telling reporters at Downing Street that Labour had to “respect the result of the election, and we cannot get away from the fact that Labour didn’t win.” He added: “I think it’s right to say that the party with the most seats” — the Conservatives — “should be the first option” for forming a new government.

The old Blairite cabinet ministers lined up before television cameras to say that the Conservatives should be given a free run to form a government, either by themselves as a minority or in a coalition with the Liberal Democrats. They included John Reid and David Blunkett, both former home secretaries; and Charlie Falconer, a former lord chancellor, all of whom said that Labour should go into opposition and rebuild itself under a new Labour in preparation for the next election.

Blunkett was most outspoken, saying that the Liberal Democrats, in shuttling between the two major parties and trying to bid up the price for their support, were “behaving like every harlot in history.”

BBC: Why the West's attacks on Mugabe rebound

EYEWITNESS ACCOUNT: It's War on the streets of Mumbai