A year ago, British Prime Minister Theresa May was riding high. Having triggered Article 50, she had the Conservative party lock-step behind her and a 20-point lead over the Labour Party. 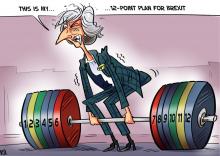 Everyone, both within her party and the wider Westminster commentariat, believed it was just a question of when, not if, she went.

Perceived as terminally weak, she faced a continuous leadership challenge, a divided cabinet, an increasingly rebellious backbench and a resurgent Jeremy Corbyn.

But after a month in which she has won widespread praise for her handling of the Salisbury poisoning scandal, eased business fears by agreeing a Brexit transition deal and silenced those calling for her head, some have begun to suggest May is not as unelectable as previously thought.

Her rising popularity in recent weeks led Spectator columnist Steerpike to say he “has detected the faint whiff of May-mania on the horizon”.

Making comparisons between May’s tough stance towards Vladimir Putin and Margaret Thatcher’s handling of the Falklands War, The Daily Telegraph said “there is nothing quite like standing up to a foreign bully to enhance a leader’s domestic reputation”.

The diplomatic coup of getting Britain’s allies in Europe and elsewhere to expel more than 100 Russian diplomats “adds to the growing mood at Westminster that the PM might have got her groove back”, agrees Stephen Bush in The New Statesmen.

“The theory runs like this,” he says. “She's had a good crisis, and if she can get a good Brexit deal, there will be no real pretext to get rid of her. Another defensive reshuffle in which no plausible better candidate emerges and you can just see how she might end up fighting the next election after all.”

Theresa May has herself said she would like to lead her party into the next election, and has repeatedly told aides that she does not want her premiership solely defined by Brexit.

For once, it looks like she may get her way, says Politico. “The champagne corks should be popping in No 10,” it says, because “for the first time in what feels like forever, Brexit barely featured in yesterday’s papers amid a barrage of domestic policy announcements”.

Labour by contrast, has endured a torrid few weeks. Jeremy Corbyn’s attempts to politicise the Salisbury poisoning, then his failure to pursue a strong line against Russia, incensed many in his party, as well as much of the media.

This was compounded by the anti-semitism row which has rocked the party this week. Coupled with the Labour leadership’s continued ambivalence about Brexit and the ongoing threat from hard-left Momentum activists, it has strained the uneasy truce between moderates and Corbynites that has held since the election.

If it collapses entirely, expect a repeat of the antics that characterised the Labour party in the 12 months between the referendum and the election.

Chaos in Labour’s ranks just as the country nears the Brexit departure date would further boost the perception that May can in fact provide her much-derided “strong and stable” government.

She can also point to polls showing that, despite the travails of the past year, the Tories have remained level with Labour (or in some cases even ahead), while her personal ratings still top those of Jeremy Corbyn.

For the time being, the dead woman walking may have some life left in her yet.

*This story first appeared on The Week.co.uk.

Doomed: 'May set for further failure as Prime Minister'