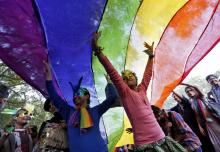 Chief Minister of the Indian beach state of Goa Laxmikant Parsekar, has slammed plans by his youth affairs minister to set up treatment centres for young lesbians, gays, bisexuals and transgender people (LGBT), a move that had enraged activists.

Tawadkar, the sports and youth affairs minister, who is from Prime Minister Narendra Modi's ruling Bharatiya Janata Party, told journalists on Monday that the planned centres for LGBT youths would be like centres for alcoholics.

"We will make them (LGBT youth) normal. We will have a centre for them. Like Alcoholics Anonymous centres, we will have centres. We will train them and give them medicines too," said Tawadkar, releasing the state government policy on youth issues.

"As in the case of other target groups such as juvenile offenders, drug-afflicted youth, marginalised or migrant youth, geographically disadvantaged youth, a detailed survey would be carried out of the LGBT community so that their problems could be specifically addressed," the minister said.

Gay sex is illegal in India. The country's top court reinstated a ban on gay sex in 2013, ending four years of decriminalisation that had helped bring homosexuality into the open in this deeply conservative country.

The Supreme Court ruled that only parliament could change British colonial-era section 377 of the penal code, widely interpreted to refer to homosexual sex.

The law, which dates back to 1860, prohibits "carnal intercourse against the order of nature with any man, woman or animal." Violation of the law can be punished with up to 10 years in jail. 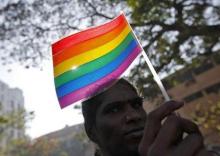 Activists say that since the ban was reinstated, there has been a surge in crimes against sexual minorities in the world's largest democracy, including rape, assault, blackmail and harassment.

United Nations Secretary General Ban Ki-moon said this week that he was staunchly opposed to the criminalisation of homosexuality.

"I am proud to stand for the equality of all people - including those who are lesbian, gay, bisexual and transgender," Ban said in a speech during a visit to India.

"I speak out because laws criminalising consensual, adult same-sex relationships violate basic rights to privacy and to freedom from discrimination. Even if they are not enforced, these laws breed intolerance."

Davuluri: 'Too Indian for America, too dark for India'