The painful practice of binding young girls' feet seems like an ancient tradition. But photographer Jo Farrell has tracked down the last living survivors in the remote areas of China.

In rural China, where the neon lights of the country’s big cities don’t shine, traces of the old country remain - hidden in tiny shoes.

Foot-binding, the cruel practice of mutilating the feet of young girls, was once pervasive in turn-of-the-century China, where it was seen as a sign of wealth and marriage eligibility. For a millennium - from the 10th to 20th centuries - the practice flourished on and off, deeply ingrained in Chinese society. Even after it was outlawed in 1912, many women continued to clandestinely bind their daughters’ feet, believing it would make them more attractive to suitors.

For nearly a decade, British photographer Jo Farrell has been travelling to far-flung Chinese provinces to track down the last surviving women with bound feet. At first, she was unaware that such women even still existed. But she has since uncovered a little-discussed and almost never seen practice that has endured in China’s aging female population. Forgotten by a society that hopes to bury any trace of the “old China” under skyscrapers and technology, the women readily bared their lotus-like feet for Farrell’s project, “Living History.”

But time is running out. Though she has begun building a portfolio of subjects, Farrell fears the remaining foot-binding survivors will slip away without documentation, and, with them, the memory of the harsh practice. The women she has photographed are between 80 and 100 years old, and already three of them have passed away in the course of her project. Now, as the last remaining women with bound feet become older and frailer, Farrell is returning to China to find more survivors and put her finger to the shutter at least one last time. 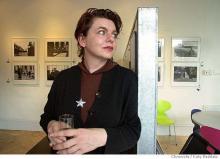 rs ago, Farrell, curious if the practice of foot-binding still existed, asked a friend in China, who in turn asked her sister, who was overheard by her car driver. The driver revealed that he had a grandmother with bound feet.

It was this elderly woman, Zhan Yun Ying, who would become Farrell’s first subject. “It was kind of shocking but in some ways beautiful,” she remembers. “When she took her shoes and socks off, her feet were totally, fully in lotus shape. To me, they represented the trouble and toil this woman [has] been through - and what women do go through - to attract a partner…There was something quite tremendous about it.”

This first session set off a domino effect of unexpected proportions. Pretty soon, Farrell’s translator introduced the photographer to her own grandmother, and a young man on a bus to Beijing invited Farrell to his village to meet the women he knew with bound feet. More tips poured in, and her portfolio of subjects continued to grow, reaching now nearly 50 in all.

Most of the woman Farrell has interviewed had their feet bound when they were pre-teens, though the practice traditionally began at an even younger age. Bandages would bind the feet in two directions: one crushing the small toes under the ball of the foot, and the other pushing the heel toward the toes to create a steep arch.

While none of the women have refused to bare their feet for Farrell’s camera, they’re baffled at her curiosity. “They say, ‘This is old world, this is ugly, not something you want to photograph.’” Most of them haven’t even showed members of their family their feet, she says. “They are very concerned that this is old China, not something done today. And their adult children want [to] make sure I understand this is not what China does, and it would not happen anymore.”

The archaic practice has often thought to have affected mainly wealthier Chinese woman, whose bound feet showed they could afford not to toil in the fields. But, Farrell found that almost all the women she spoke to were from lower-class farming families. Many had worked in the fields for seven decades, doing tasks that didn’t require much movement, like digging and husking corn.

“It was out of a mother’s love, [they] wanted to do the best for their daughters and this was the way at the time to ensure better prospects” Farrell says. The tiny, dainty feet were hidden away in miniature shoes. Prospective mothers-in-law, noting the bound feet, would see the girl had already suffered without complaint and would be a subservient partner to their sons. “Quite often it was a sign that the girl would be a suitable bride.”

Many of these women have been forgotten even by the small villages where they still live. “In the village life, they’re just the old grandmothers who are not talked about. So me going in and photographing them - they suddenly love the fact they’re the centre of attention, they haven’t been the centre of attention for so long.” While she’s working, crowds gather around their houses, straining for a peek inside. Farrell makes a point of taking extra photos of the women and their families on a colour roll, which she prints the next day and gives as gifts.

An aesthetic precision distinguishes Farrell’s work. Snapping her pictures on 12-shot rolls of black-and-white film, Farrell doesn’t crop or edit them in the darkroom. Her undoctored pictures don’t only depict the crushed toes and curled arches that mark the cruelty of the practice, but also the women to whom the feet belong, their families, and their possessions.

“Many had worked in the fields for seven decades, doing tasks that didn’t require much movement, like digging and husking corn.”

A few years ago, while she was working in marketing for an architectural firm, Farrell moved from San Francisco to Hong Kong to be closer to China and continue her project. After a recent layoff, she’s decided to focus full time on photography. She sees a hole in previous ethnographic work documenting foot binding, which has focused on the delicate shoes and the historic context and academic analysis of the practice rather than the actual people who are living with its after-effects. She plans to return to China for at least a month to photograph as many women as she can find, along with following up on the lives of her previous subjects.

Unable to continue the work on her own dime, Farrell launched a Kickstarter campaign. The success - she’s raised almost $15,000 -amazed her. “I’ve been working on this for eight years, and no one has really shown any interest in it, [but] I’ve believed in it: trying to capture some of these women before they all disappear.” The Chinese, she says, have shown little interest in studying the last remnants of the practice, “mainly because it’s old ways and they don’t like to be shown to be backward.”

So, it’s been left to her to seek out and document the remaining survivors of this practice. She is continuing to solicit donations and hopes for a publisher to pick up her book, and a gallery to display a major exhibition of the photographs.

Besides, now she has a reputation to keep up. In the towns she continues to return to, the villagers recognise her immediately. “I’m the foot woman,” she says. “It’s quite funny.”

To show how foot-binding survivors walk, Farrell created this video: * Nina Strochlic is a reporter and researcher for The Daily Beast.com.