The death of African-American singer-songwriter and guitarist Chuck Berry (October 18 1926 - March 18 2017), who died of natural causes at his home in Saint Charles, Missouri, provides us with an opportunity to revisit Black, pop, rock music history and cultural politics.

Before we get into the music, I’d like to briefly touch on his personal life, which was complex and contradictory. He had several brushes with the law, from his teenage years right up into his long career as a star.

Berry was charged in 1959 and then jailed under the Mann Act (also known as The White-Slave Traffic Act), for transporting across American state borders, allegedly for sexual purposes, a 14-year-old Mexican girl, Janice Norine Escalanti, whom he had employed at a night club he owned. In Twenty years later he went back to prison for tax evasion.

In spite of his philandering, Berry stayed married to Themetta "Toddy" Suggs for nearly 70 years. They wed in 1948. Indeed, when Berry celebrated his 90th birthday last October, he dedicated to her his last studio recorded album, provisionally titled Chuck, saying: “This record is dedicated to my beloved Toddy."

Adding somewhat prophetically: "My darlin’ I’m growing old! I’ve worked on this record for a long time. Now I can hang up my shoes!” 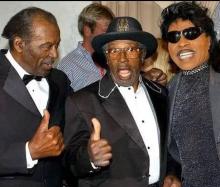 Whether you know Berry’s music or not, it’s fair to say pop and rock music in particular would not be what it is without him. A pioneer, along with the likes of Bo Diddley and Little Richard, during the transformation of rhythm and blues into rock and roll in the early 1950s, Berry’s guitar-laced music, lyrical vignettes of urban and adolescent lives, and fine diction, made him a star at a time of notorious racial segregation in America and when "race music" was one of the terms for Black music.

Musically, Berry publicly acknowledged his debt to guitar players, including Muddy Waters, Carl Hogan and Charlie Christian, who spanned a range of genres.

But his unique skill was to inject into these influences a vibrant urgency against a driving backbeat. From details like foregrounding the double-stop (two strings played at once) to the overarching dynamics of his playing, he produced the template for the rock guitar solo. His famous “duckwalk” also centralised the guitar solo, and took it centre stage, not just as a musical instrument but also as a dynamic stage prop unlike ever before. 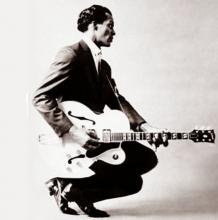 As a writer, his lyricist’s eye allowed him to blend the world weary, hard living concerns of the blues with a narrative style that crystallised the experiences of a generation of young people growing up in the post war era of American dominance of Western popular culture. His songs were firmly rooted in the history of Black American music but delved into the pop genre of the present.

He had a heightened awareness of America's deeply racially segregated audiences. For inspiration, he drew on country as well as blues and jazz.

Berry had an acute sense of how to bridge the Black and white divide by deliberately modulating his vocals, as he explained in his autobiography: "Listening to my idol Nat Cole prompted me to sing sentimental songs with distinction diction. The songs of Muddy Waters impelled me to deliver the down-home blues in the language they came from."

He added: "When I played hillbilly songs, I stressed my diction so that it was harder and whiter. All in all it was my intention to hold both the Black and the white clientele by voicing the different kinds of songs in their customary tongues." 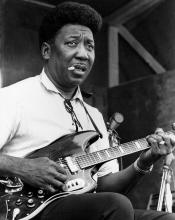 But still he dealt with the evils of the racial divide in his music, although his keenness to earn as much money as possible and early decision to be an entertainer first and foremost rather than a champion of Black rights meant that he did so subtly, rather than head on. For example, he changed the semi-autobiographical Johnny B. Goode from a “coloured” to a “country” boy to widen the song’s cross-over appeal.

One might also comment on the fact, Nat King Cole-style, he straightened his hair, which some African-Americans frowned on as trying to look white.

Berry’s early hits, from the mid-1950s to the early 1960s such as Maybellene, Johnny B. Goode, Memphis, Tennessee, Roll Over Beethoven , School Day (Ring! Ring! Goes the Bell), Sweet Little Sixteen, Let It Rock to No Particular Place To Go, were instrumental in setting the template for rock and roll, which in the latter 1960s began to be called rock music, or simply rock. 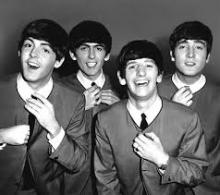 Countless rock acts from the US and UK were not only inspired by Berry, but trailblazers such as The Beatles and Rolling Stones had hits with covers of some of his songs. However, while today’s face of rock music has been white-washed, not unsurprisingly, several of rock music’s white leading lights pay homage to Berry.

This is what Rolling Stones singer Mick Jagger said: "I want to thank him for all the inspirational music he gave to us. He lit up our teenage years, and blew life into our dreams of being musicians and performers. His lyrics shone above others and threw a strange light on the American dream. Chuck, you were amazing, and your music is engraved inside us forever."

Former Beatle Paul McCartney revealed the influence of Berry, saying: "From the first minute we heard the great guitar intro to Sweet Little Sixteen, we became fans of the great Chuck Berry."

He added: "His stories were more like poems than lyrics - the likes of Johnny B. Goode or Maybellene. To us he was a magician making music that was exotic yet normal at the same time. We learnt so many things from him which led us into a dream world of rock 'n' roll music."

And this is what McCartney’s former Beatles band mate John Lennon once said: “If you tried to give rock and roll another name, you might call it 'Chuck Berry’.”

Bruce Springsteen, also known as "The Boss’, who knew who the real boss was whenever he played with Berry, had this to say of his mentor: “Chuck Berry was rock’s greatest practitioner, guitarist, and the greatest pure rock and roll writer who ever lived.”

One more tribute from someone who has a more important back story. “I am so sad to hear about Chuck Berry passing - a big inspiration!” tweeted Beach Boy Brian Wilson.

In 1963, Berry and his music publisher had to wrestle the rights of Surfin' USA from Wilson, and get Berry’s name as a co-writer of the Beach Boys’ hit, which was a blatant rip off of Sweet Little Sixteen. Click here to see that and other revealing stories on my Youtube post Black Music Appropriation: Culture, Copyright, Ownership: Background For Discussion. 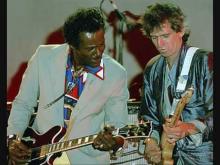 Berry was always conscious, if not over-conscious about money. He’s said to have preferred to use randomly found local musicians to back him up, than have to pay more for a permanent band. He was also reputed to demand cash up front from concert promoters before going on stage. He fully understood it was the cut-throat music business. And indeed in spite of his obvious creative genius, Berry admitted he came into music to make money to house and feed his family

Although he loved music, Berry once cautioned others about the music, saying: “Don’t leave out the economics. No way.”

Berry was financially comfortable but nowhere as rich as the white rock artists who came after him and become extremely wealthy ripping off the great man or being inspired by him.

On my Youtube video, actor Lamman Rucker talks about cultural appropriation, and highlights the financial side. “Don’t do my thing and not give me my share - so that's when it becomes theft,” he opines.

You will also hear Rolling Stones’ Keith Richards making a candid admission at Berry’s induction into the Rock and Roll Hall of Fame in 1986. “It’s very difficult for me to talk about Chuck Berry, because I lifted every lick he ever played. This is the gentleman who started it all, as far as I’m concerned,” admits Richards.

Fine words, but then the video goes on to reveal the financial worth of the master and the student. The estimated wealth of Berry and Richards are put at $19m and $280, respectively - glaring economic disparity of more than 10 to one.

Especially as we’re in the UN International Decade For People Of African Descent (IDPAD) 2015-24, uncomfortable questions need to be asked about what financial benefits African creators receive for their creativity when there’s a long history of white artists and producers ripping off African cultural works and, at best, admitting the source of their “inspiration”, but rarely providing any financial compensation.

The Black Music Congress (BMC), which I founded, is planning a Talking Copyright workshop for June or July that will look at issues of cultural appropriation, and issues of copyright and beyond. We also expect to hold a two-day conference from a global South and decolonisation perspective.

BMC-related RE:IMI (Race Equality: In Music Industry), does not only aim to facilitate a transparent discourse on race equality within the music industry. It’s also developing the concept of a cultural premium to deal with restitution to benefit African communities. They want this to be paid by non-Africans for building a career based on usage of the African cultural pool.

It’s nice reading all the international tributes to Chuck Berry, but moving forward, perhaps the white artists who have been “inspired” by him and made money from his music should consider contributing towards a foundation in his memory to support Africans in his home town. Which Berry-loving, or Berry-inspired white star is ready to make a donation? 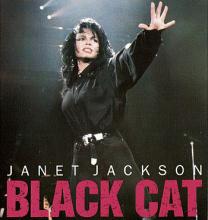 For me, a fitting legacy of Berry would be if more people, African and white alike, realise that rock music is Black music. It’s a big ask, considering that when Janet and Michael Jackson respectively released Black Cat and Black And White – two patently rock records, as usual, because of their colour, the music was generally described as anything but rock.

On a personal note, I remember seeing Berry at Wembley Arena in the 1990s. Outside, there was a desperate fan who offered me £100 for my spare ticket – unfortunately my guest showed up. Inside, it was a nostalgic show, with his 1972 US and UK chart-topping ditty My Ding-A-Ling being the most obvious crowd-pleaser.

Chuck (Dualtone Records/Universal), Berry’s first new album since 1979's Rock It, features his children and a grandson. It will be released in June. You can check out the first single and Johnny B. Goode-evocative Big Boys.

* Kwaku is founder of BritishBlackMusic.com/Black Music Congress, whose initiative is British Black Music Month. On July 3 2017 there will be the Rock Music Is Black Music presentation at Harrow Mencap, which is inspired by the death of Chuck Berry. Click here for more information.