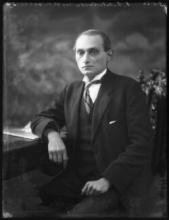 “Why did you write about a Paki?” asked an African Caribbean man at a launch of my original Comrade Sak book two decades ago. It would be nice to think such bigoted attitudes have changed since then. A fellow politically Black person telling the story of Shapurji Saklatvala, an exceptional but forgotten 20th-century British Indian politician, should surely be something to applaud.

After all, many people from Jamaica, from which my Second World War veteran father came, and elsewhere in the Caribbean, have Indian ancestry, including me. (US senator Kamala Harris, who has been chosen as Joe Biden’s running mate in his bid to become American president, is another.)

After the abolition of slavery in the 1840s, indentured “coolie” -  virtually slave -  labour from places like Bihar, near modern day Bangladesh, was shipped to the Caribbean, as an exploitative trade the book’s subject, Saklatvala, fought against throughout his political career.

Born into immense wealth and privilege, a young dissident Saklatvala was packed off to England, by his mega rich Tata family, who were keen not to upset India’s British colonial rulers, with whom they did most of their business. But exiling him turned out to be the worst thing they could have done. Because, rejecting his background, Saklatvala met and married a working-class northern woman and sought out the company of prominent radical socialists whose politics he eagerly adopted.

Not long after its foundation in 1920, Saklatvala joined the communist party and, as prospective parliamentary candidate for North Battersea, became one of the revolutionary party’s two MPs elected two years later. His constituency was so socialist, commentators dubbed it “Bolshie [Bolshevik] Battesea”. Saklatvala’s unstinting activism in solidarity with working-class causes, trade unions and predominantly Indian independence, combined with his inspiring oratory, made him extremely popular locally. His staunch support for Irish independence, in a seat whose population was said to comprise a large majority of people descended from Ireland, added to his allure.

I unearthed a monumental row Saklatvala had with Gandhi over Indian independence struggle tactics, which went on to be generously quoted by Cambridge scholar Priyamvada Gopal in her seminal book that came out last year.

The political issues, of socialism, racial equality, justice, anti-colonialism and internationalism, Saklatvala championed a century ago, are still being contested today. In that contemporary context, I deal candidly with Corbynism, among other hot topics.

*Marc Wadsworth is a journalist, broadcaster, historian and human rights campaigner. He is Editor at The-Latest.