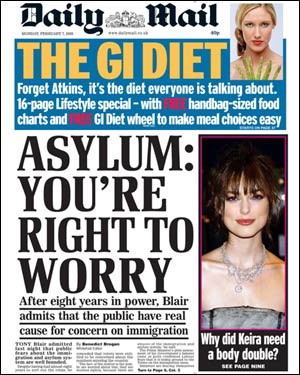 UK tabloid newspapers are commonly characterised by their pet hates as demonstrated in their loaded editorials, spewed out in their emotive headlines and typified in their published stories.

The Daily Mail is no exception. In fact, if it were possible for newspapers to have the ailment, obsessive compulsive disorder, then the Mail with its rigid cycle of same-theme articles would certainly qualify for intensive treatment.

The paper's deep-rooted dislike of the National Health Service, people who are in receipt of state benefits, the BBC, immigrants, trade unions and anything or anyone that smacks of leftward thinking is legendary. So too are the paper's scaremonger stories about health issues (cancer is a favourite) and preoccupation with celebrity which includes scathing pieces about so-called ageing, overweight, famous women by its team of sour female reporters.

Someone, somewhere on the internet was sufficiently inspired to create a diagram of Daily Mail obsessions laid out like the lines on a London Underground tube map. View it here and enjoy.

'I've done it my way' says president of Brazil