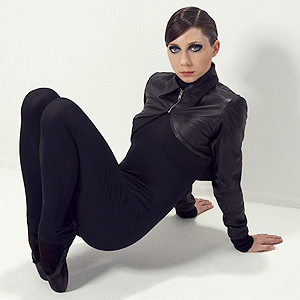 “It is amazing when you can actually get eye contact with someone” said my dear friend last night in the foyer of the Barbican Theatre, while we were waiting to go in to see the Michael Clark Company.

She had put her contact lenses in for the first time, in a long time. Probably not since before the time when she sat down to lunch at an eatery with her ‘work colleagues’ starting conversations and wondering why no one was responding back to her other than looking on with complete astonishment. It was in fact a group of strangers she had embedded herself within and not her ‘work colleagues’ at all, who, were waiting for her outside.

My friend's decision to wear contact lenses on this evening was a wise choice. You see it is all in the detail and the Michael Clark Company has a significant amount of detail. Clark's training at the Royal Ballet School and then work in the Rambert Dance Company, along with his passion for punk, allows him to once again pull out all the stops for his new production for the Bite 09 season.

The two pieces interlinked with the common theme, primarily the music, were thoroughly welcomed by the audience. The dance routine "Swamp" followed by "Come, been gone" were both full of detail. Using his recognisable dance language, Clark has created two new pieces that encompass a modern take on classical shapes and forms.

It has been said that most creative people achieve one great idea and that everything else is a variation on that theme. Perhaps with such strict use of dance vocabulary, this may very well be the case here, but his language is a delight to watch and along with the music it is completely mesmerising. His new work comes from musical influences of artists like David Bowie, Lou Reed, Iggy Pop and Wire during the 1970s, where, at the Barbican‘s superb acoustics, the sound plays a prominent part of the piece. Clark says: “Rock is my rock. It has been vital to me at a personal level; it has shaped me as an individual as well as an artist”.

He has a sensibility about his work that looks at personal vices such as Heroin and doubt along with control and precision. With longstanding dancers in his company he has a troupe that really ‘get’ his ideas and he is able to achieve what he wants out of them. A standing ovation at the Barbican, to be expected of course. Clark is one of Britains great contemporary ballet company’s. Yes, my dear friend was right to put in her contact lenses for this flawless performance and I think she knew it.

*The Michael Clark Company at the Barbican Theatre from October 28th to November 7th, 2009.