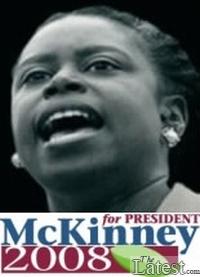 Green candidate for the American presidency Cynthia McKinney has trumped the news media hype of the the Democratic convention coronation of pop star politician Barack Obama by launching a devastating attack on her former party.

McKinney, who served six-terms as a congresswoman from Georgia in the Deep South, said the Democrats had taken the impeachment of war criminal President George W. Bush off the table, failed to set a timetable for the withdrawal of US troops from the "illegal and immoral war" in Iraq and "did not even mention Hurricanes Katrina and Rita survivors in their Congressional agenda for its first 100 days in office".

She added that It should be remembered also that this was the party which had aided and abetted President Bush's new measures to widen illegal spying on US citizens by the state - yet it has the gall to call itself the party of "change" and "hope".

McKinney made the following remarks to the "DNC (Democratic Party National Convention) Stop the War Protest" on the steps of the Colorado State Capitol, in Denver, where the convention is taking place: "The Democratic Party has shown itself to be incapable of providing even a semblance of the values even of its own activists. Our country has been hijacked and the Democrats have proven themselves to have been in on the plan. When it came to the American constitution, the Democratic leadership showed us that aiding and abetting illegal spying on us was more important to them than protecting our civil liberties.

When it came to war and occupation, the Democratic leadership showed us that financing an illegal and immoral war, based on lies, was more important to them than the people's desire for peace.

And when the people, hurting from the financial mismanagement of this country, called for accountability for the crimes that have been committed against the people here, against the global community, against nature, itself, the Democratic leadership took impeachment off the table.

Grassroots Democratic Party activists want a livable wage. A "Medicare-for-all" type of health care system, repeal of the Bush tax cuts that have ushered in the greatest income inequality in this country since the Great Depression.

The Democratic Party's national leadership didn't even mention Hurricanes Katrina and Rita survivors in their Congressional agenda for the first 100 days.

Entire cities are going into receivership while the Democratic leadership in Congress gives the Pentagon one half trillion dollars annually.

The Democratic Party's national leadership gave us the Iran Naval Blockade bill, the Violent Radicalisation and Homegrown Terrorism Prevention Act, and telecom (eavesdropping) immunity. They continue to fund war and occupation of Iraq to the tune of $720 million a day while our children graduate from college tens - or even hundreds - of thousands of dollars in debt.

Entire cities are going into receivership while the Democratic leadership in Congress gives the Pentagon one half trillion dollars annually with no accountability, no strings attached. That's over and above spending for war.
Abu Ghraib and Guantanamo are the hallmarks of the new US gulag Democrats are helping to create.

They want us to believe that China and Russia are our enemies, in addition to the 60 countries on Dick Cheney's list. They want us to believe that workers, who come to this country to support their families after Democratic leadership in the country saddled workers with NAFTA (the illiberal North American Free Trade Alliance), are our enemies. But we are here today to declare that we know who the real enemies are: those false patriots that George Washington warned us of, who wrap themselves in the flag while betraying our values.

We are the true patriots. We know that the strength of this country lies in the way it countenances dissent. And we are here to dissent. We are not deterred by reports of sleek, new detention facilities or recently-acquired taser guns that kill. For we come to dissent in peace. Indeed, we dissent for peace.

We know that a vote for the Democrats is a vote for more war. Today, we declare our independence from conformity and "go-along-to-get-along" politics. We declare our willingness to be radical in pursuit of peace and in our hunger for justice. We can see clearly now who the real stickup artists are and that's why we're in Denver.

Our actions here this week begin the disarming of the hijackers. We no longer are afraid. And we won't be deceived. We know that a vote for the Democrats is a vote for more war in Afghanistan and other parts of the world.

But today, we are now free. Free to stand on the four pillars guiding our political engagement: environmental wisdom, peace, grassroots democracy, and social justice. And finally, we know our power. We know the power of the people. We know that true power rests in the hands of the people. People who are willing to take a stand.

We need look no further than Haiti, Cote I'voire, Spain, and India to see the power of the people at the ballot box. No further than Brazil, Venezuela, Chile, Argentina, Ecuador, Bolivia, Nicaragua, and Paraguay to know that if they can do it, so can we. Provided our elections are fair.

And if the Democrats cave in, in the face of fraud, disfranchisement, and theft, then we will be there to demand election integrity.All over this country, the signs are there. People from New York to Florida, Washington State to California, Colorado to Texas are liberating themselves. We must not stop. Our country is worth it. Let's take our country back. Power to the People."

McKinney's candidacy is not as marginal as it might seem. In Britain, the influential Black newspaper New Nation has backed her rather than Obama.

* McKinney has been told that her campaign can still qualify for matching state funds. Donations can be made at www.runcynthiarun.org or mail your contribution to Power to the People, P.O. Box 311759, Atlanta, GA 31131.