Divided UK: What next for PM Boris Johnson?

British elections that took place on Thursday were in many ways a symbolic referendum on Boris Johnson. While the results are still coming in, early signs suggest the Prime Minister can chalk this one up as a victory.

Final polls going into the numerous local elections suggest that Johnson's Conservatives have held onto mayoralties in key battleground areas and will increase their share of local councils.

Most symbolically, Johnson's party took the only UK parliamentary seat up for grabs, in a special election in Hartlepool, which has been held by the Labour party since the northern English seat was created in 1974. It is almost unheard of for a governing party to win a by-election and especially impressive that Johnson managed to do this after his party has been in power since 2010.

Much has happened since Johnson won his landslide majority in the 2019 general election. Back then, the UK was stuck in a Brexit deadlock, with no majority for anything in parliament frustrating a public clearly eager to move on. Much of Johnson's 2019 success has been attributed to the fact he had an "oven-ready" Brexit deal and just needed the votes in parliament to get the job done -- that, and a weak opposition leader in Jeremy Corbyn, an old-fashioned socialist who alienated many voters.

Shortly after Johnson fulfilled his promise and took the UK out of the EU on January 31, 2020, he was hit with the most severe crisis of this generation: a pandemic that would kill at least 127,000 Britons, one of the highest per capita death rates in the world.

The list of Johnson's Covid-19 mishaps is long. Early in the crisis, he was criticised for going into lockdown too late, not taking the virus seriously enough (famously saying he was still shaking hands with people at the same time Covid-19 was ripping through the country) and dropping the ball on crucial matters like testing and providing protective equipment for medical workers.

His government has been accused of sleaze and cronyism, handing lucrative contracts to people with links to his party. Most recently, Johnson was accused of saying he'd rather "let the bodies pile high in their thousands" than impose another lockdown, a comment he denied making.

Outside of coronavirus, his Brexit deal has been criticised for being sloppy and poorly implemented, leaving exporters in serious trouble. He is also being formally investigated by the electoral commission for allegedly letting Conservative donors pay for a very expensive refurbishment of his flat in Downing Street.

And his judgment has come under serious scrutiny following a huge fallout in his inner circle.

How, then, has Johnson so resoundingly won this referendum on his leadership? 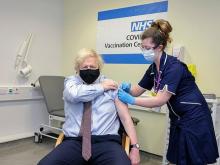 The first point to note is that Johnson has been bailed out by his government's vaccine rollout. The UK opted not to join the EU's procurement scheme and, effectively threw as much money as possible to secure the most doses. As a result, the UK is steaming ahead with its vaccination program, a success that Johnson is able to attribute to being outside the EU -- an incorrect but, for many, believable claim.

More importantly, Johnson has managed to shift the centre ground in England, a difficult feat in modern politics. People who previously would have never considered voting Conservative now see his party as an entirely different entity to the one led by Margaret Thatcher in the 1980s, and even more recently by David Cameron and Theresa May.

The traditional ideas of left-wing economics and left-wing social policy going hand in hand no longer really exists. Brexit was perhaps the clearest indicator of this, where people in traditional Labour areas voted for a campaign spearheaded by Johnson, the archetypal Conservative.

Through a mixture of populism, willingness to spend state money and performative patriotism, he has found a way to appeal to a particular Englishness that is a million miles from the globalist liberal who was mayor of London not so long ago.

Finally, the UK is very divided, which works in the Prime Minister's favour at least for now. Johnson and Brexit are on the whole popular in England; the only parts of that country that buck this trend are sufficiently small for him not to need them to win a general election.

The picture is different in the other three countries of the UK where Johnson and the Conservative government have less power and are less attractive to many voters. This is most true in Scotland, where the pro-independence Scottish National Party looks set to extend its dominance.

It's not all good news, though. Sooner rather than later, absolute hell will be unleashed in Scotland as the calls to leave the UK become a roar, but with next to no chance of happening. And political instability between unionists and nationalists in Northern Ireland is raising fresh fears of sectarian violence.

Longer term, there will be a post-mortem of the mishandling of the pandemic. Brexit will inevitably have a more visible impact on the economy. The spats with Europe over the new relationship might reach a tipping point that irritates the public.

And while Johnson appears to have gamed British politics perfectly for now, he's done so by driving a wedge between the four nations and by reaping the benefits of grievance politics. It could keep Johnson and his party in power for another generation, but it could also drive the citizens on the United Kingdom further apart, which could have political, economic and social consequences well into the future.

One day, it's entirely possible Johnson may come to regret unleashing these demons for the sake of victory.