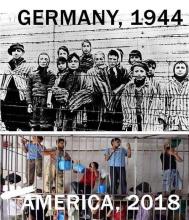 Worldwide condemnation of Donald Trump’s zero-tolerance immigration policy that had been tearing apart migrant families led to the US President having to do a u turn. Here The-Latest’s US correspondent Karen Hatter puts the issue in context from a progressive American perspective.

This commentary offers what is an opposite view of many people that have articulated their disbelief and horror at the Trump administration’s kidnapping of migrant children from their parents and dispersing them all across the United States of America. The majority of the parents have not been told to where their children have been taken. The youngsters have been plunged into a state of panic and fear as they watch their mothers and fathers handcuffed and led away to face an unknown fate.

President Donald J Trump and his administration, which has always had only the slightest relationship with the truth, ignored data that revealed there is not a crisis of brown people coming to “infest” the United States, a quoted verb used by Trump as he described those people heading northward into the United States. The current humanitarian crisis into which Donald Trump has plunged America is entirely self-created.

During the current pseudo premise of solving the immigration crisis, as portrayed by Trump, he has attempted, and in some circles in American society he has succeeded, to conflate those seeking asylum with criminals, the president even using the incendiary term "rapists" for them. He adds the strategy of dehumanising any and all non-white people, in this instance brown people entering the US from the southern border with Mexico, with selective, ugly language aimed at to cultivating and reaping from the fertile ground of the America's white psyche in an effort to reinforce the malignant elements that are festering in the country.

But do not be fooled. White nationalist talking points have never only concerned themselves with illegal immigration. For generations in America, so called conservative politicians and the previously mentioned segments of society have advocated for restrictions on the legal pathway to immigration, with an emphasis on decreasing the flow of non-Europeans into the US. Right-wing television, radio and the internet commentators have wailed at the decline of  "real Americans" within the borders of the United States.

As this crisis unfolds, it has been revealed many of the people that have been caught up in Trump’s disastrous policy have sought to come into the country at ports of entry and have been turned away. It was glaringly obvious who Trump considered desirable immigrants to the US when he exploded and complained about "shit hole" African countries, querying why couldn’t there be more folks coming from Sweden. 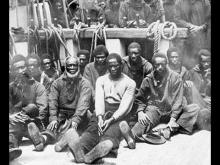 It invokes painful memories of the children of African parents wrenched away from their parents and dispersed around the world. Newly arrived on America's shores, the innocents were sold as commodities by the slave traders, enabling the United States government to build its wealth on the foundation of enslaved people’s labour for 400 hundreds years.

Similarly, the children of the Native Peoples of the United States were subjected to the horror and suffering of their children being taken away from them to attend what were referred to as "boarding schools", the first of which was opened in 1860, the United States government opined, to teach the Native children not to be savages. The motto of the boarding school system coined by the founder of the schools was: “Kill the Indian, save the man.”

These children were removed from their parents’ care, prevented from speaking their native languages and denied any embrace of their culture and were punished if found to be doing so. It wasn’t until 1978 that Native American parents were given the right to stop the placement of their children in these schools with the passage of the Indian Child Welfare Act.

Donald J Trump and his administration miscalculated the response of the American people and the world when they implemented a plan that has resulted in the kidnapping and spiriting away of thousands of brown children, relocating them in the dead of night, in the belief that the majority of Americans and the world would look on with a lack of interest and outrage. Trump's mindset, and that of those in his administration, is clouded by their white nationalist outlook.

Already work has begun on the next phase of the Trump Zero Tolerance Policy. In a purely theatrical move and with much flourish, Trump signed a presidential executive order, stating he was going to keep the families together. This will consist of holding adults and children together in detention camps behind barbed wire, with plans to house thousands of people on US Army territory in tent cities. This is a move that will guarantee even less transparency during the process of detaining migrant men, women and children.

Since the Trump Zero Tolerance Policy has been implemented in the United States, many commentators and legislators here in the United States have been stating that what is now happening, detaining and splitting apart families of the people entering from countries in so called Latin America, who have made the perilous trek to these shores, is un-American. I would suggest it be stated by fold around the internationally that America should not allow this type of barbarity to continue.