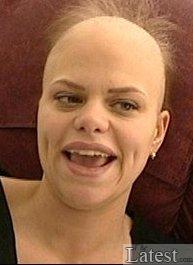 Jade Goody has been targeted by a website that ranks celebrities on their likelihood to die in 2009. Sick, deathlist.net has identified 50 celebrities who it feels are unlikely to last another 12 months.

Although she didn't make the list, the 27-year-old former Big Brother contestant, who was diagnosed with cancer last year, and has two sons Bobby, five, and Freddie, four, is the subject in a forum entitled:  "Is she poppadoomed?" Visitors have left their ideas for newspaper headlines.

Other celebrities include train robber Ronnie Biggs in first place, former England and Newcastle football manager Bobby Robson in sixth, Patrick Swayze in 12th and former British Prime Minister Margaret Thatcher in 45th. The rules on inclusion state that candidates must be famous in their own right such that their death is expected to be reported in the UK media.

However, candidates cannot be famous purely for the fact they are likely to die soon. A maximum of 25 candidates on the previous year's list can reappear on the next year's list. The website proudly claims that  "expectations were high" for the coming year. The disclaimer said:  "A fine performance from Deathlist 2008, with a record-equalling 14 deaths, makes expectations high for the 2009 list."

"The ongoing battle with medical science continues as it slowly but surely makes the challenge greater each year, but hopefully this is offset by the endless research of the forum members in combing the news sources of the world for nuggets of information on those who are ready to claim a DeathList success as their final contribution to society."

The website even has a merchandise section where visitors can buy t-shirts, mugs and even thongs emblazoned with the DeathList logo.

Cuban achitecture that moves you