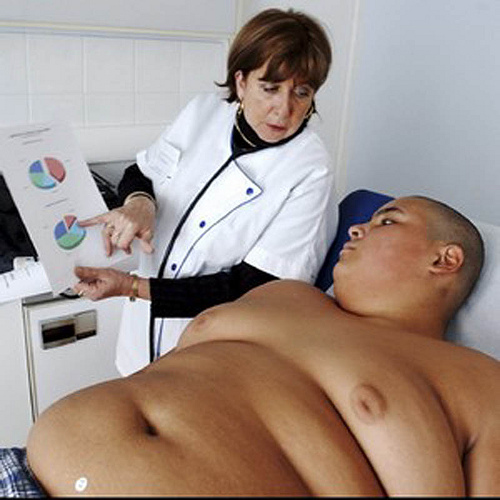 Obesity in the UK is spiralling out of control. Shocking new figures released this week by the National Health Service Information Centre reveal that the number of people ending up in hospital because they are too fat has soared. Rajdeep Sandhu has spent the last three years working in a high street supermarket and gives us an insider's view of the disturbing eating habits of some shoppers.

Last year, obesity was the cause of 60 per cent more hospital admissions than the previous year.

And in the past five years the numbers needing care because they are dangerously overweight has more than quadrupled.

The figures include treatment for breathing problems, Type 2 diabetes, circulation problems, organ failure or heart disease which doctors say was caused by people being obese.

Tim Straughan, chief executive of the NHS Information Centre, said: “The large increase in admissions for obesity reflects the growing impact that obesity has on the health of our nation as well as the demands it is placing on limited NHS resources”.

In the last few years I have learnt a lot about people and their food habits. I see the same faces every Sunday, doing their weekly shop. I see what food they buy and what goes in there their mouths week in week out

Whilst the majority of the people that I serve each week seem to have cracked the code to a healthy-ish lifestyle, there are still those who are trailing far behind, literally. Not only are these individuals overweight and doing deadly damage to their own bodies, they are also unwittingly passing down bad food habits to their children.

The sad part is that I can see the devastating effects it has on their kids. Perhaps these patterns of behaviour are due to lack of parental knowledge about healthy eating. Or maybe obesity is the inevitable consequence of a genetic disorder that is inescapable for many.

However, having had a first-hand view of what is in some shopping baskets I doubt it. This often includes large quantities of crisps, chocolates, ready meals, and fizzy drinks - bad food that will stop you from being able to see your own toes.

Being only a lowly customer sales assistant I am powerless to stop the obese from getting any bigger. I can refuse to sell alcohol, fireworks, cigarettes and DVDs to those I think it is unsuitable for because the law says I can, so shouldn’t I also be able to help those who are slowly killing themselves by clogging up their bodies with fat and refuse to sell them certain food products?

In moderation, confectionary and ready meals are fine as long as they are eaten as part of a healthy balanced diet, rather than being the whole diet.

There is one particular family I encounter at work regularly, consisting of three children with ages ranging from 4 to 12-years-old. The impact of a diet high in sugar, salt and fat has already left them with a lot more than just puppy fat. All three children seem in need of constant attention and on top of the junk in the basket that their parents buy for them, they still want more from the counter. If they don’t get what they want, screaming tantrums follow which are painful to watch.

Blaming parents alone would be too easy, but they should be the first ones to stand up and take responsibility for the health of their own children. Fast-paced lifestyles and obsession with striving for material wealth rather than valuing the simple things in life are also key factors which should be examined as causes of obesity. Maybe adopting a more relaxed lifestyle, where there is actually time to consider the harmful effects of that yellow and brownish gunk you’re about to put in your mouth would lead to a slimmer and healthier nation.

Torture in the dentist's chair