Off the Endz is a modern day tragedy 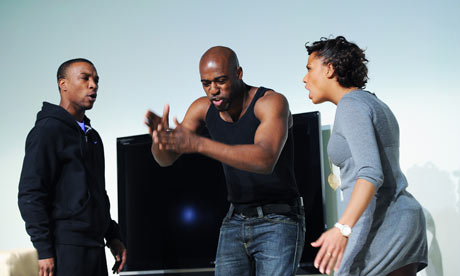 Squashed between tube passengers under a shelter in front of Sloane Square train station in the heart of London, the sky continued to throw itself at the ground.

My poor attempt to helmet my freshly tonged, premium hair with the Evening Standard newspaper proved to be as effective as robbing a bank.

A good idea at first, a tough task to maintain successfully and eventually an epic failure.

Desperately avoiding the 'been stood up in the rain' look, I decided to call my date but realised he must be underground on the tube when the infamous answer machine cue beamed into my ears.

It’s been a long time since I've been taken to the theatre so I was quick to accept the offer of seeing Ashley Walters better known as Asher D star in Olivier award winning writer Bola Agbaje's play Off the Endz at the Royal Court Theatre. I hadn’t been to the venue before, which is so surprising for a theatre lover like me (since I'm usually the type to sleep through a film at the cinema but could easily recite half the script from a live production).

I only discovered that the theatre was about 70 yards to my right when I spotted the lead actor having an intimate moment with his cigarette at the bottom of the steps leading to the main doors just minutes prior to when he would wow me on stage as character David.

I dodged puddles and untamed umbrellas, smile at Asher D, then looked up at the blown up version of him on the Off The Endz poster, just before pushing the doors open with the side of my hip.

With a sigh of relief after finding a sensible roof and not having to walk far, my date turned up just in time for the opening curtains. We scurried to our balcony seats as the lights dimmed. The whites of people’s eyes could be seen as they stared at our silhouettes tiptoeing through the narrow gaps as we tried to read the seat numbers in the dark.

After a couple "oops" and "sorry excuse me please" we settled down to enjoy the show.

I’m happy to say that it was an engaging performance. I sat on the edge of seat B6 and giggled the loudest when David (Ashley Walters) appeared butt naked on stage.

Off The Endz is a story about two schoolboy buddies who come of age in a London council estate (the endz) and are parted by David's prison sentence.

On his release from jail the trouble-prone ex-gangster reunites with his best friend Kojo and ex-girl Sharron (Lorraine Burroughs) who are now a couple and expecting a child and planning to move on from the estate. David is a hyped kind of guy and doesn't realise that although Kojo (played brilliantly by Daniel Francis) is struggling financially, he wants to live life the right way.

Walters has a good go at playing an incorrigibly cocky, charismatic and pretty, sexy young man who could have had a lot going for him. David is convinced that he can't get a job as a black man with a criminal record and so holds on to street dreams and chases a “Champaign campaign” lifestyle.

Eventually his yearning for a quick fix for his problems leads him to drug dealing – an inevitable route to tragedy. “You’re slaves to the system”, David tells Kojo, but is this doesn’t excuse his immoral and illegal pursuit of riches. He is a man trying to be different from others because he doesn’t want to adapt to societies expectations.

The themes of snakes versus ladders and criminality versus conforming are evident throughout the play. However, on a critical note, I felt that Bola Agbaje’s characters were under developed.

Nevertheless, the one hour and 20 minute long play had a penetrating moral destination and its simplicity was refreshing. It needed no more than nine actors who painted a picture that so many young people see today. It was almost like the “hood” or ghetto version of Tv soap opera East Enders, of which I am a fan. Perhaps a little like Dubplate Drama. I suppose it would have to be a series for the audience to explore the inner thoughts and feelings of each character.

David is an ex-con, who doesn’t even know what Sky+ is, yet he wants to rewind into his turbulent past, pause the present to get what he wants and already tainted by his criminal record, he chooses not to play the game by societies rules. It’s sure to get the young urban generation into the art of theatre production.

My favourite quote from the play: "A path with no obstacles is a path that leads to nowhere." – Kojo.