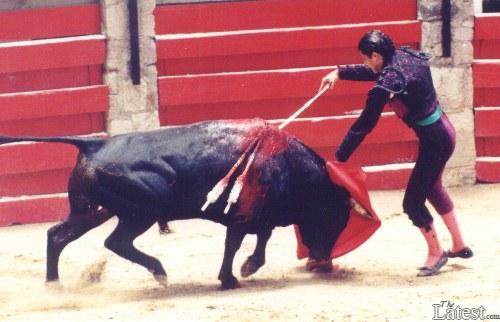 Animal right campaigners have embarrassed the European Union by revealing that the economic alliance is using taxpayers' money to help fund blood thirsty bull fighting in one of its Mediterranean member countries.

People for the Ethical Treatment of Animals (PETA) say that the EU spends  £30 million a year to support what Spain calls a  'European cultural heritage'. The huge sum of money from officials in Brussles is used to renovate bullrings and increase the amount of breeding among bulls. The highly controversial sport, opposed by millions of animal lovers throughout the world, results in 40,000 bulls being slaughtered every year.

Tony Moore, campaigner for the welfare group Fight Against Animal Cruelty in Europe says;  "The organisers of bullfights in Spain have told me that they love the EU because they now receive enough subsidies to kill 15 or 16 animals in a fiesta rather than the traditional one or two."

The  £30 million supplement helps other fiestas that inflict cruelty to animals including beheading chickens and drowning cows. The EU however claim that they have no control over the finances of bull fighting:  "We do not condone the use of EU money to support bull-fighting, but we cannot stop it. It is outside our legal competence to do so," said a European Commission's spokesman for agriculture and rural development.

With animal welfare organisations such as PETA turning their attention to bull fighting, the EU and Spanish government have a battle on their hands to convince opponents that it is a cultural heritage which should receive millions of pounds a year in funding.

Two of PETA's long-running campaigns are "Here's the rest of your fur coat"and "I'd Rather Go Naked Than Wear Fur" in which supermodels, like Naomi Campbell and Christine Turlington, appeared nude on big posters to express their opposition to wearing fur.

But the US-based group severed its relationship with some of the models 10 years ago, including Campbell, Kate Moss and Cindy Crawford, when they continued to wear fur.