Europe must stop shifting the blame for migrant crisis

In a very reluctant, not quite shame-faced way, Europe has moved to restore sea patrols to their previous level to rescue the “boat people” of today – fleeing from war-torn countries across the Mediterranean to “fortress Europe” and its unwelcoming debates over people from elsewhere.

These debates have been exacerbated by elections and the alarmist rhetoric accompanying them. The rise of right-wing parties who see simple prohibitions of migration as a cure for all social ills is a feature of the political landscapes from the UK to France to Germany and beyond.

But the Mediterranean crisis is a timely reminder of just how complicated the issue really is – even when the moral imperative to save lives could not be clearer.

Most obviously, by any normal European standard of moral behaviour, human beings cannot be left to drown when they could be saved. Rescuing them is not the same as giving them right of abode.

But on top of that, European countries must accept that they have made the process of claiming asylum absurdly difficult and long-winded. The need for reform is clearly desperate, and it must be done without entirely stripping the process of hope for claimants. The justice of Europe’s immigration and asylum processes, not just their outcomes, is also on trial here.

There’s also another appallingly simple factor. Insofar as a very large number of African and Middle Eastern migrants are refugees from wars that Europe has waged, with the destruction of their cities, livelihoods, and hopes – or are refugees from authoritarian and totalitarian regimes that Europe has supported – Europe cannot shrug off the consequences of its own bad judgements. 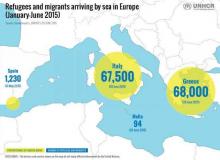 Too often and in too many places, its nations have either waged war without plans for the aftermath, or not helped when they could have (as in the case of Syria). We cannot impose guilt upon those seeking to escape conditions for which we ourselves should feel at least some guilt. And then there are different forms of war that people flee, which are of course not all caused by Europe – the never-ending conscription in paranoid Eritrea is a case in point.

All of these people contend with the extortionate and brutal methods of people-traffickers, who make people pay huge prices for shipment to Europe and then force people who cannot swim into tiny boats at gunpoint.

And the world over, there are various “experiments” in how to treat refugees and asylum seekers underway. Australia tows them to third-party territories. Israel is said to be agreeing exactly such a deal with Rwanda for its own Eritrean and Sudanese refugees. How such arrangements stack up in terms of international law seems moot.

On this scale, the Italians have a record of relative generosity towards refugees. But the current crisis will not stop at Italy. Other Mediterranean EU countries with long and open coastlines include Greece and Croatia. Seal off one destination and others will be found.

Now that the EU has agreed to triple its funding for sea patrols (which were insufficient even before they were dialled back), Europe could at least get into a proper debate as to how to handle the Mediterranean boat people of today.

They must not become cheap fodder for self-serving exercises we cravenly brand as “democracy”, pouring scorn on people who are often seeking nothing more than a free and democratic way of life – and who apparently value it rather more than we do.

* Stephen Chan is Professor of World Politics, SOAS, University of London. This article first appeared on the conversation.com