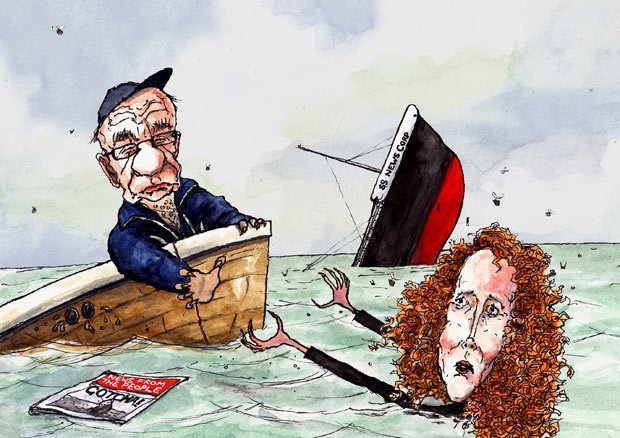 Former News of the World editor Rebekah Brooks always walked the narrow path between writing the news and being herself the subject of press headlines.

Her complicity in the wrongdoing of reporters at the now defunked News of the World newspaper, who routinely intercepted the mobile phone messages of celebrities, politicians and victims of crime, is established in the minds of many and her guilt may yet be proved by a future criminal prosecution.

A waitress at Scoffers restaurant in Battersea Rise, south London, told celebrity website Pop Bitch she served ex-Eastenders soap star Ross Kemp and Rebekah at least once a week for more than a year while they were married. He, we're told, was very sweet. She, in all that time, never once left a tip. Apparently, Ross and Rebekah used to speak French to each other in restaurants so other diners couldn't follow their conversations.

"Wade in the waters"

Rumours about the domestic disturbance incident at the Kemp and Wade household in November 2005 have been swirling ever since it happened. How true any of them are is anyone's guess but what we can tell you is that the couple had a swimming pool in their basement and one of the arresting police officers nearly fell in it trying to apprehend Rebekah.

Staff at News International claim Rebekah had a private investigator keep tabs on Ross Kemp when they were married because she thought he might been having an affair.

Rebekah apparently decided at the last minute that she wanted to go to Glastonbury so asked a reporter to arrange it for her and ten friends. Somewhat shaken by the request, he tried to tell  her that it might not be possible to get  so many tickets. At which Brooks, used to having Prime Ministers at her beck and call, looked at him absolutely  mystified and said... "Tickets? Why would I need tickets?". Rumours that she helicoptered out as soon as she saw that the "luxury accommodation" site was not up to her usual standard in order to go to Cliveden are at this point unconfirmed.

Welcome to the United Kingdom of Romania and Bulgaria