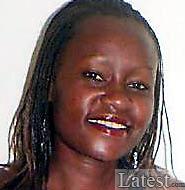 'The opposition leaders want to hold rallies with their supporters because they say the election was stolen from them but the government said no more rallies after the elections. For the past three weeks it's been a running battle between the opposition supporters and the police. I think you know from CNN (the US TV news broadcaster) that there have been a lot of killings. A lot of people from the president's Kikuyu tribe have been displaced, killed and raped. It is hell here.

There is tension at work too. As a Kikuyu [the largest group of Kenyan people], I don't know whether I am safe in the current political climate. I fear I will be killed in one of the riots on the street that happen very quickly. There are people and police milling around and the situation is very dangerous. I'm scared to go outside. So, I am staying indoors with my son (Ian, six) as much as possible. I want to get out of here. Leave the country.'

A statement by a group of independent UN rights experts on Friday said: "We are profoundly alarmed by the reports of incitement to racial hatred and the growing frictions between the different ethnic groups in Kenya."

There are news media reports that protesters furious at alleged electoral fraud went on the rampage, killing scores of people and torching churches, businesses and homes.

The opposition Orange Democratic Movement (ODM) party has laid down four conditions to resolve the political deadlock. They want Kibaki to stand down as president; an international body appointed to adjudicate in the dispute; and in the meantime, a transitional authority established to oversee steps to condition four: a new presidential election in three months' time.

A Kenyan government spokesman, Alfred Mutua, said the opposition's three-month deadline smacked of "blackmail". He told the BBC: "What we are clearly saying is that Kenya is not a banana republic, Kenya is not a war-torn country."

"We have court systems and laws and orders and what we are saying is that let things follow the procedures like they do in other countries with constitutions."

ODM leader, Raila Odinga, leader of the Luo, a minority Kenyan people, has warned that the ongoing killings of innocent protestors would jeopardise talks on the political stalemate. He claimed that indiscriminate police killings arising from the disputed presidential elections were undermining efforts of restoring order.

Odinga said: "Police are killing Kenyans as the world watches. How do you dialogue with killers. President Kibaki, minister for Internal Security, Prof George Saitoti, Police Commissioner, Maj-Gen Hussein Ali, and individual police officers are presiding over crimes against humanity."

Odinga added he was still open to negotiations through eminent persons, led by former UN Secretary General, Dr Kofi Annan. He warned that the fate of such talks was being undermined by murder of innocent citizens.

He said: "We will lay our demands openly, but I would not say what they are now."

Odinga urged ODM supporters to proceed with the protests and blamed Ali and Saitoti of giving the shoot-to-kill orders. "We hold Saitoti and Ali responsible for crimes of murder against Kenyans. The brutal force meted on Kenyans under their instructions cannot pass without condemnation," Odinga said.

He went on: "The Government has issued its police with shoot-to-kill orders and police officers all over the country have followed it to the letter."

During the news conference, the party's media officer, Tony Gachoka, played a KTN clip showing a police officer shooting an innocent protester in Kisumu, capital of the Luo-majority Nyanza county, and kicking him before he died. Odinga said: "A police man killed a protestor like a wildebeest is killed by a hunter's gun, yet police spokesman, Eric Kiraithe, alleged the man attacked police officers."

Odinga added that the PPO had alleged if her officers had not killed the rioters, the situation would have got even worse. He said three people were killed in his Lang'ata constituency on Wednesday and another seven butchered in Mathare in the Kasarani constituency, including a driver of the area's MP, Elizabeth Ongoro.

Ongoro said she knew the names of the officers implicated in the murders and the police stations where they were based but did not give this information to the media.

Mental illness affects one in nine US soldiers