Persistent economic crisis and unpopular austerity measures that gut social spending, in conjunction with the mass influx of refugees, have given rise to ultra-nationalist and even neo-fascist movements in Europe.

Racist, right-wing terror is exploding on the continent, and the climate of increasing xenophobia is driving attacks on refugees who are fleeing Western-backed wars.

In Germany, more than 1,100 attacks on refugee shelters and asylum-seekers were registered with the government in the first five months of 2016.

On Friday, May 27, police in Austria arrested a suspected neo-Nazi who allegedly threatened to massacre refugees seeking asylum in the country, AFP reported.

The 20-year-old suspected Nazi “repeatedly told friends that he wanted to “Shoot dead all asylum seekers with his shotgun” at a refugee centre Upper Austria police said. 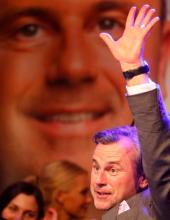 Less than a week before, on Sunday, May 22, a man with neo-Nazi links went on a rampage at a concert in western Austria. He killed two people and injured 12 more before shooting himself.

The shooter had previously been active in the fascist skinhead scene, and had several assault convictions and was banned from owning weapons. This previous attack did not appear to be linked to anti-refugee racism, but it is part of a larger explosion of extreme right-wing violence throughout the West.

Much of this violence is linked to anti-refugee sentiment.

In 2015, Austria received approximately 90,000 asylum requests, the second highest per capita in the E.U.

Most refugees are fleeing Western-backed wars in Syria, Iraq, Afghanistan, Libya and more.

Austria’s Freedom Party, which narrowly lost Austria’s presidential election in May, is historically linked to Nazis. And the Pegida movement, which began in Germany and has since spread throughout Europe, was founded by a man who dresses up like Hitler for fun.

Anti-refugee violence is off the charts in Germany. German Interior Minister Thomas de Maizière warned on Monday that there has been a “brutalisation” of society.

In France, armed far-right militias attacked asylum-seekers in the Calais refugee camp. The refugees said police refused to stop the violence, and even carried out attacks of their own. The French government later ordered the destruction of the refugee camp.

There have been similar surges in right-wing racist violence in Sweden, the Czech Republic, Slovakia, Finland and more.

As far-right movements grow in Western political systems - with the Freedom Party in Austria and Pegida in Germany, along with the National Front in France, the English Defence League in the UK, Jobbik in Hungary, the Danish People’s Party in Denmark, the Party for Freedom in the Netherlands, Golden Dawn in Greece and the Republican Party under Donald Trump in the US, with its concomitant paramilitaries operating on the border - right-wing extremists have been increasingly emboldened to carry out acts of terror, often with impunity.

*Ben Norton is is a politics writer at Salon.com.