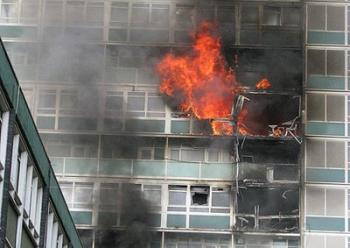 Town hall chiefs in a London borough rocked by a blaze which claimed the lives of six council tenants are using public funds to employ a £500 an hour city law firm to defend them against legal action.

This will come as a slap in the face to the victims of the July 3 inferno at 14-storey Lakanal House, Camberwell, south London. A three-week-old baby and two other child were among those who died. More than 100 people were made homeless.

The council has offered new homes and financial compensation to survivors, including a handful of leaseholders, who lost their flats in the blaze. But, with some tenants owing money in rent arrears, it is believed that a significant number of them will end up with little cash help with which to rebuild their lives after the council has clawed back the debt. The council denies this.

An email seen by The-Latest confirms that the Lib Dem council leader Nick Stanton has hired law firm Burton and Copeland in an attempt to salvage the reputation of his ruling administration amid growing concerns about the safety of council housing in the borough. The law firm's former clients have included pop stars Amy Winehouse, George Michael and alleged horse racing cheat Kieren Fallon, the champion jockey.

When The-Latest  contacted Guy Bastable, the lawyer at Burton Copeland who will look after Southwark, and said he must know about the Camberwell blaze he evasively quipped "should I?" and took our number. But he failed to return the call with a response.

His legal bill could run into hundreds of thousands of pounds. One town hall insider told us that Southwark council bosses have given Burton and Copeland “a blank cheque to get them out of the huge legal challenges they face”. It is possible legal action over corporate manslaughter could be among many claims against Southwark’s rulers.

Ian Wingfield, a Labour councillor in the ward that covers the estate where the blaze happened, said: “This is a scandalous waste of public money. Frankly it’s appalling that the Lib Dem council are lining the pockets of city fat cats whilst the residents, victims of this terrible fire, are given not much at all to try and put their lives back together.”

One resident Lars Von Sheriffe, a Canadian who lives just metres from where the blaze took place, questioned the motivation for hiring the legal big shots. He said: “It’s disgusting. I have lived here a very long time and the people in power just don’t care about the poor. It’s just a patch up job they are doing on these flats and now it looks like they are going to do a white wash on the public inquiry. Nobody listens. I have been saying this for years. Nobody listens.”

But the Lib-Dem Southwark councillor responsible for housing has hit back at the critics. Paul Noblet told The-Latest: “Our priority is to ensure each resident involved in the tragic fire has the housing, financial and emotional support they need to get on with their lives."

He said that, in addition to the discretionary payments of at least £500 the council had already made to families, they would also receive a statutory payment of £4,700, a £1,400 start up pack including new furniture, and £500 towards moving costs to help them make a fresh start.

Cllr Noblet added: "Over half of Lakanal residents have already accepted a new home, and we will continue to offer support to families, including hot meals and child care, whilst we help them find a new place to live, which we understand may not be the first place we show them round."

<P>This feature story highlights the major concern of some resident in the borough of Southwark about this “marriage” between the Tory and the Liberal Democrat at the Southwark council. I can’t understand why on&nbsp;earth the council can afford to pay £500 an hour to a city law firm to protect its reputation while the same council is ready to pay just &nbsp;£4,700 to&nbsp; residents who have forced to move out of the Lakanal &nbsp;House.</P> <P>Considering what the residents at <STRONG>Lakanal tower block</STRONG><STRONG> </STRONG>have been through and, many of them still do not have a permanent home, it’s not a lot of money for them to rebuild their lives.</P> <P>I do really think that the Council has some questions to answer and I am convinced that the Lakanal House blaze&nbsp;will be an important issue during the next local elections in Southwark next year.</P> <P>&nbsp;Guy Momat.</P>