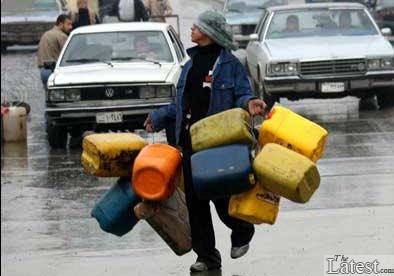 Popular perceptions of the recently sky-rocketing oil price is that there is an oil shortage in global energy markets. The perceived shortage is generally blamed on the Organisation of Petroleum Exporting countries (OPEC) for  "insufficient" production, or on countries like China and India for their increased demand for energy, or on both.

This perception is reinforced - indeed, largely shaped —by the Bush administration and its neo-conservative handlers who are eager to deflect attention away from war and geopolitical turbulence as driving forces behind the skyrocketing energy prices.

Impressions of an oil shortage are further bolstered by Wall Street and its financial giants that are taking advantage of the insecurity created by war and geo-political turmoil in oil markets and are making fortunes through manipulative speculation in commodity futures markets.

Perceptions of insufficient oil supply are also heightened by the recently resuscitated theory of the so-called Peak Oil, which maintains that world production of conventional oil will soon reach —if it has not already reached - a maximum, or peak, and decline thereafter, with grave socio-economic consequences.

However, claims of an oil shortage are not supported by facts. Evidence shows that, in reality, there is no discrepancy between production and consumption of oil on a global level. Citing statistical evidence of parity between production and consumption of oil, OPEC President Chakib Khelil recently emphasised that there was no shortage of oil. He said: "As far as fundamentals are concerned I think we have equilibrium between supply and demand. . . . In fact right now we have more supply than demand."

Facts of abundant oil supplies in global markets are now also being acknowledged and reported by mainstream media. For example, Ed Wallace of Business Week recently reported that  "that worldwide production of oil has risen 2.5 per cent in the first quarter, while worldwide demand has grown by only 2 per cent. Production is expected to increase by 3.3 per cent in the second quarter, and by as much as 4.1 per cent by the third quarter. The net result is that the U.S. daily buffer for oil production against demand, which was a paltry 1.5 million barrels as recently as 2005, is now up to three million barrels in excess capacity today."

Wallace then asks,  "So what is going on here? Why would our Energy Secretary say there's a supply and demand problem when none exists? Why would he say that speculators have little or nothing to do with the incredibly high price of oil and gasoline, when it's clear they do? President Bush - a former oilman - gives the ever-growing demand for gasoline as the primary reason prices are so high, yet that notion can be dispelled with one minute of research."

So, if indeed there is no imbalance between production and consumption of oil in global markets, how do we then explain the sky-rocketing oil prices?

The answer, in a nutshell, is: war and geo-political instability in oil markets. Contrary to the claims of the champions of war and militarism, of the Wall Street speculators in energy markets, and of the proponents of Peak Oil, the current oil price shocks are caused largely by the destabilizing wars and political turbulences in the Middle East. These include not only the raging wars in Iraq and Afghanistan, but also the danger of a looming war against Iran that would threaten the flow of oil out of Persian Gulf through the Strait of Hormuz.

Close scrutiny of the soaring oil prices shows that any time there is a renewed US or Israeli military threat against Iran, fuel prices move up several notches. For example, Agence France-Press (AFP) recently reported,  "Crude oil prices went on a record-setting surge Friday as fears of a new Middle East conflict were fanned by comments from a top Israeli official about Iran. New York's main oil futures contract …leapt 10.75 dollars a barrel —its biggest one-day jump ever."

War and political chaos in the Middle East tend to increase energy prices in a number of ways. For one thing, as war plunges the US deep into debt, it depreciates the dollar —thereby appreciating, or inflating, the price of dollar-denominated commodities, especially oil.

A depreciated dollar tends to raise the price of oil (and other commodities) in two major ways. First, since oil is priced in US dollars, oil exporting countries would demand more of the cheaper dollars for the same barrel of oil in order to maintain the purchasing power of their oil. Second, when the dollar falls, oil prices rise because investors are more likely to use their money to buy tangible assets or commodities such as oil and gold that won't lose value.

According to a number of energy experts, between 30- and 40 per cent of the recent increases in the price of oil can be attributed to dollar depreciation. One of the simplest ways to calculate this is to compare the price per barrel of oil in dollars and euros over the last five years.  "The widening gap between the two [dollar price vs. euro price] indicates that 35 per cent of the increase in the price of oil could be attributed to currency [dollar] devaluation."

Stronger than the impact of dollar depreciation on the price of oil has been the impact of manipulative speculation: war and political instability have served as breeding grounds for hoarding and speculation in energy futures markets. According to F. William Engdahl, a top expert on energy and financial markets,  "As much as 60 per cent of today's crude oil price is pure speculation driven by large trader banks and hedge funds. It has nothing to do with the convenient myths of Peak Oil. It has to do with control of oil and its price. . . . Since the advent of oil futures trading and the two major London and New York oil futures contracts, control of oil prices has left OPEC and gone to Wall Street. It is a classic case of the tail that wags the dog."

US Representative Bart T. Stupak, Democrat - Michigan, chairman of the subcommittee investigating commodity market speculation, attributes even a higher percentage of the oil price hike to market manipulation:  "Speculations now account for about 70 per cent of all benchmark crude trading on the New York Mercantile Exchange, up from 37 per cent in 200."

Wall Street financial giants that created the Third World debt crisis in the late 1970s and early 1980s, the tech bubble in the 1990s, and the housing bubble in the 2000s are now hard at work creating the oil bubble. By purchasing large numbers of futures contracts, and thereby pushing up futures prices to even higher levels than current prices, speculators have provided a financial incentive for giant futures traders to buy even more oil and place it in storage.

Unrestrained by an appalling lack of regulation, this has led to a steady rise in crude oil inventories over the last two years,  "resulting in US crude oil inventories that are now higher than at any time in the previous eight years. The large influx of speculative investment into oil futures has led to a situation where we have both high supplies of crude oil and high crude oil prices. . . . In fact, during this period global supplies have exceeded demand, according to the US Department of Energy."

The fact that the sky-rocketing oil prices of late have been accompanied by a surplus in global oil markets was also brought to the attention of President George W. Bush by Saudi officials when he asked them during a recent trip to the kingdom to increase production in order to stem the rising prices. Saudi officials reminded the President that  "there is plenty of oil on the market. Iran has put some 30 million barrels of oil that it can't sell into floating storage.  'If we produced more oil, it wouldn't find buyers,' says the Saudi source. It wouldn't affect the price at all."

And why producing more oil  "wouldn't affect the price at all"? Well, because what is driving the soaring oil prices is not shortage but speculation:  "with so much investment money sloshing around in the commodities markets, the Saudis calculate they have no hope of controlling short-term price fluctuations. They blame the recent price run-ups on speculation and fear of shortages [not real shortages], factors they say are beyond their control."

While it is important to point out the impacts of dollar depreciation and commodity speculation on the price of oil, it is even more important to show that both of these factors are by-products of war and militarism. Not only has the war played a critical role in the weakening of the dollar (through plunging the US deep into debt), it has also created favourable grounds for manipulative speculation in commodity markets, especially energy markets.

Therefore, while efforts to curb speculation in energy markets (through regulation of the largely unregulated futures markets) or buttress the dollar from further declining may sound comforting, such efforts will remain illusive and ineffectual unless the devastating wars and military adventures in the oil-rich Middle East are terminated; that is, unless the root causes of currency depreciation and commodity speculation are exposed and cut out.

Voters battle for heart and soul of South Africa