It was all mink everything at Astrid Andersen's stellar debut bespoke show for MADE Fashion Week. The London designer's fall/winter 2015 collection featured all sorts of fur looks, from an oversized swakara basketball jersey to a fuzzy varsity sweatshirt. Having seen the collection firsthand, the overwhelming presence of gaudy animal hair on the runway signified to me just how prevalent and popular fur is among emerging designers.

In the year 2000, there were only 41 designers using fur in ready-to-wear. The teeny numbers are largely thanks to the efforts of groups like PETA (People for the Ethical Treatment of Animals) in shifting popular opinion about fur in the 90s. Today, however, there are over 500. From New York to Milan, and from the catwalk to the crowd, it's hard to look anywhere at fashion week without seeing an animal pelt draped over someone's shoulders. All the hot designers, from Alexander Want to Hood By Air, are experimenting with fur. Which is weird to me -I grew up in a generation that was lambasted with grotesque videos of furriers mutilating cute animals.

The formation of PETA in 1981 kicked off the era of intense backlash against the fur industry. PETA's early campaigns focused on animal testing and slaughterhouse cruelty. But in the early 90s, the group turned its attention to fur and released a series of investigative videos in 1994 that documented ranchers abusing chinchillas and minks by clipping electric wires to their genitals and injecting them with weed killers. Then it launched the "I'd Rather Go Naked Than Wear Fur" campaign, which drew the support of several celebrities willing to pose nude, like Cindy Crawford and Naomi Campbell. Prominent vegetarian musicians like grunge-hero Eddie Vedder also helped make the fur look outmoded and uncool.

It seemed like the movement to ban fur was unstoppable with its strong celebrity backing, passing of international animal welfare legislation, and brands like Calvin Klein discontinuing their support of fur. In 2007, PETA Founder Ingrid Newkirk boasted that the young designers weren't even into using fur anymore. It was only the "old fogy designers like Karl Lagerfeld and so on... who want to be bad boys" who were still holding on to the tired trend.

But in the new millennium, a new fur trend bubbled and has finally blossomed in the past five years. It started with artists like Busta Rhymes, 50 Cent, and Lil' Kim sporting mink and chinchilla in music videos and magazine covers, helping dope boy chic become vogue. As hip-hop artists became the dominant purveyors of cool, the trends went from thrift store flannels to luxurious fur coats.

Over the past 15 years, the fur market in the US has been on the uptick, with experts from the Fur Information Council of America estimating that 2014's growth was more than 10 percent. It's no coincidence that this trajectory has coincided with hip-hop taking over the catwalk - from Sean Combs winning a CFDA award in 2004 to Kanye West presenting the most talked-about collection at the most recent New York Fashion Week.

The rise of fur is also being fuelled by growth in the luxury market, as a growing number of people can afford the lavish garments that can fetch as much as $30,000. The US had a 5 percent increase last year in personal luxury spending, trumping Asia and Europe, which explains why I saw London designer Astrid Andersen's bespoke collection at Milk Studios in New York instead of the Somerset House in London.

While PETA remains active in fighting the use of fur, it appears fashion's attitude about the subject can be summed up with Kanye West's Cold song lyrics: Can a real n**** get money anymore? Tell PETA my mink is dragging on the floor.

"Designers have embraced fur for its unique textural characteristics, its visual cues and its warmth, its sustainability, and the creative flexibility it offers," says Keith Kaplan from Fur Information Council of America. "Innovations in manufacturing technology have made fur a broad creative canvas. The result is more designers adapting fur in more ways than ever to ready-to-wear, outerwear, shoes, and accessories."

These days, the fur manufacturers are fighting back against PETA with their own marketing campaigns that purport real fur as being more natural and sustainable than faux fur. They criticise the production of fake fur due to its use of non-renewable petroleum-based materials like nylon that take thousands of years to decompose and can cause nitrous-oxide pollution. And they tout furring as a job-creating industry. Valued at $1.39 billion in the US in 2013, some fur proponents estimate the industry employs more than 200,000 people in North America alone. 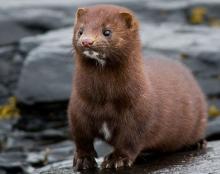 They also balk at the accusations of cruelty and claim that their practices are tightly regulated at all levels, with animal welfare as their top priority. Kopenhagen Furs, for example, is a Danish luxury brand that works with designers like Astrid Andersen. It says it has strict regulations for the minks it raises. And, according to the company's website, it provides fur farmers with tools to manage their farms to correct any welfare problems and require annual veterinarian visits.

Michael Whealan, Executive Director of the Fur Commission USA goes on to say that American fur farms are also held to high standards of care. "As far as mink production in the US is concerned, I think the biggest misconception is that mink on farms are not cared for properly, or that they are abused in some way," says Whealan. "Animal rights advocates have been spreading this message to further their anti-animal agenda for decades, despite their inability to back it up with evidence. Every veterinarian will tell you that if an animal is mistreated or neglected, the first evidence will show up in the condition of the fur, so it goes to show that US farmers take animal care and welfare extremely seriously."

But PETA Senior Vice President Dan Mathews doesn't seem to be worried about the influx of fur on the runway telling me that "niche couture designers [like Astrid Anderson] may cling to their fur fetish, but mainstream retailers (including Ralph Lauren, Calvin Klein, Tommy Hilfiger, etc...) have abandoned fur."

While it is true that retailers like H&M and Forever 21 and brands like Tommy Hilfiger stopped using furs like angora, these American lifestyle brands didn't stray away from the fur trend and have been using faux fur instead in recent collections. And there's no guarantee they'll resist the appeal of fur as the demand continues to ratchet up, considering other brands like Georgio Armani have made a similar pledges, only to resort back to fur once it was lucrative.

The reality is fur is all over the runways right now, which means it's only a matter of time before it makes its way onto high street and then - whether PETA likes it or not - trickles down to Joe Shmoe at the mall. But - all the animal suffering aside - if Joe starts looking like Cam'ron circa 2002, maybe it's worth it?

'Donate your unwanted fur and save an animal's life'