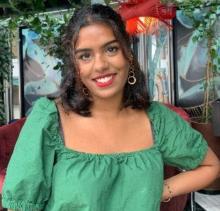 Gay Pride is synonymous with inclusivity and celebration. However, for people of colour, few safe and intersectional spaces exist.

This is especially true within the British Tamil community, of which I am a member. The LGBTQIA+ community is still a marginalised minority in both the private and public sphere. Thus, in the white-dominated LGBTQIA+ movement, Tamil individuals are alienated and isolated. This is an experience common to other ethnic minorities too.

With a personal dislike of the amorphous term BAME (which is increasingly used for categorisation) it is vital to distinguish between the varying degrees of racism, sexism and homophobia experienced by different ethnicities. This is particularly significant during this pandemic, as such individuals are disproportionately affected. It is overly optimistic to expect LGBTQIA+ people of colour to celebrate joyously this year.

To understand the British Tamil community’s hostile reception towards the LGBTQIA+ movement, one must understand how factors of colonialism and migration have deeply shaped its cultural histories. The British Tamil community is part of the Tamil diaspora. Since 1983, more than 800,000 people mass migrated from Sri Lanka due to the Sri Lankan civil war and Tamil genocide. Indeed, criminalisation of LGBTQIA+ identities in Sections 365 and 365a of Sri Lanka’s penal code can be traced back to British colonial rule. According to Viruben Nandakumar, despite independence for over seventy years, "to be queer on the island means criminalisation of lives both by the state and the community".

To complicate matters, Tamils are predominantly of Hindu faith, where Vedic-era literature states that society is divided into three main groups, with the "Tritiya-prakriti", or "third nature", encompassing a variety of minority sexual orientations and gender identities. Hinduism is inextricably linked with the Tamil community’s cultural and social structures, yet diasporic Tamil Hindu communities continue to be unwelcoming of LGBTQIA+ individuals. Thus, these layers of social, political, cultural and religious structures cause hypocrisies and confusion among younger British Tamils.

So how does this affect first-and second-generation LGBTQIA+ British Tamils? 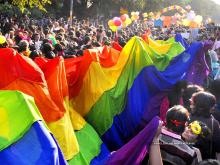 Intergenerational trauma disproportionately affects the Tamil diaspora in many ways – such as through mental health conditions, domestic violence and ‘toxic’ forms of masculinity. The UK Home Office fact-finding mission identified LGBTQIA+ individuals as a highly vulnerable group when in contact with the Sri Lankan army, police and pro-government paramilitary groups. Furthermore, Tamil men are twice as likely to have experienced wartime sexual violence than women, and more likely to be silent due to the cultural and legal stigmatisation and shame associated with homosexuality. In fear of being emasculated due to Tamil notions of ‘masculinity’, they remain underrepresented in existing statistics. Thus, public stories of LGBTQIA+ survivors are rarely recognised or celebrated within the Tamil community. This discourse is fed to younger generations, and if silence becomes the norm, the promotion of health, wellbeing and equality is significantly undermined.

In 2018, gay right campaigners Stonewall reported that 51 percent of Britons experienced racism in the LGBTQIA+ community – which, due to the "dark figure of crime", is unlikely to represent the full extent of the problem. In 2019, black and brown stripes were adopted for Manchester’s official Pride flag to be inclusive of Black and Brown members of the community. Yet trolling across social media persisted. Inevitably, "why isn’t there a white stripe?" was commented across a plethora of platforms.

This kind of abuse notably impacts queer women of colour. 43 percent of bisexual women and 53 percent of lesbian women stated they would not feel comfortable attending Pride, due to complicity with cis-hetero systems of power that ignore Pride’s fundamental non-white history, represented by figures such as Black trans activist Marsha P. Johnson and Latina trans activist Sylvia Rivera. Allyship is reduced to focusing on singular issues, and women of colour are systematically excluded since their narratives are considered too burdensome and complex.

On the other hand, UK Black Pride is celebratory for diasporic communities, where particularities are "fostered, represented and celebrated". In attracting 8,000 people annually with the support of Stonewall in 2018 – after it withdrew from London Pride due to its failing to recognise the festival’s lack of diversity – UK Black Pride offers hope, collaboration and inclusivity for all communities. This endogenous approach is also emphasised in Abuse Never Becomes Us (ANBU UK), an organisation tackling the dichotomy between Eastern and Western influences through community-based approaches for LGBTQIA+ sexual abuse survivors, so that ‘"Tamil people can find their voice". These safe spaces demonstrate a genuine commitment to recognising the complex reality of race, sexuality and inequalities.

It is clear that a double barrier exists for British Tamils: the ethnic community and Western society. A collaborative, intersectional approach to understanding the disproportionate inequalities ethnic minorities and people of colour face should be envisaged as the future of Pride. Listening to personal stories of the marginalised is a starting point. Only then will Pride truly be inclusive, all-encompassing and celebratory.