Shirly Karvinen has made beauty pageant history by becoming the second woman of colour to be crowned Miss Finland - the first, Lola Odusoga, won 20 years ago.

The mansion of Vanajanlinna in Hämeenlinna, southern Finland, is a first class hotel, which once hosted former presidents of the country. It was the perfect location for this year’s Miss Finland finals last week.

At the press conference, the media was all over her asking about her recent break-up with her husband, who was still present at the contest, observing his ex being capped with the brightest crown. “At the dinner later, he will probably give me a hug,” Shirly said.

After the direct TV broadcast, her parents were hugging her with moist eyes while Shirly herself was dropping a few tears. “I’m so proud of you!” her mother exclaimed.

Karvinen, whose nickname is "Sippe", was born in the small city of Jyväskylä in the central Finland, to a Chinese mother and Finnish father. While very young, her parents decided to move abroad, and Shirly explored different countries in Africa from Tanzania to Kenya because of her parents’ various job locations. In Africa, she said, she didn’t feel different “because there were so many kinds of different races.”

Karvinen came back to Finland at a tender age of seven. “I couldn’t speak proper Finnish. I had to learn normal words like ‘cats’ and ‘dogs’."

Her appearance raised eyebrows as well. she said: “I felt really different because I was darker and I looked different. And other people always reminded me of that.”

Only after moving to Helsinki, the Finnish capital, a couple of years ago the people “stopped reminding me of how different I look”.

Her memories of achieving the goal of becoming Miss Finland reach back to a joke by her late grandfather.

She commented: “My grandfather used to joke about me becoming the Miss Finland. But I knew it was kind of a joke but then I grew up and I felt like maybe I can try this. So, I think that if my grandfather was alive today, he would be really proud.”

Suddenly, my assistant reporter Samuel Adeoje asked Shirly under the hot lights of video cameras “What’s going through your mind right now?” “This feels very unreal and I feel that I will just going to wake up and somebody will take away my crown.” 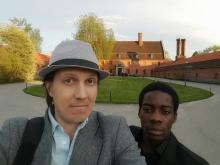 Adeoje wanted to know more. He asked: “Let’s think one year from now...what would you want the people to remember about you?”

Karvinen answered: “I would like people to remember me as someone who represented Finland in a very elegant way. Someone who is kind and open, and I want all Finnish people to see me as their own Miss Finland.”