Horror of sexual assaults in US prisons 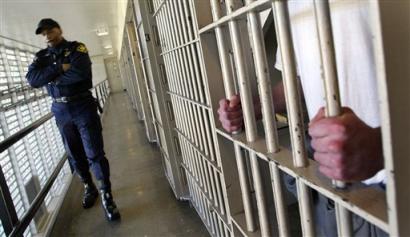 In the same week in which the world was told about mass rapes taking place in the Congo, a report was released which detailed the prevalence of rape in prisons and jails across the United States.

In 2008 and 2009, 88,500 adults held in jails and prisons reported being sexually assaulted. The rates of exploitation of juveniles is even higher, one in eight will be victimised during their incarceration. Those are numbers that ought to give rise to mass protest around the nation.

American journalists will go all the way to Africa to report on sexual assault when they are able to inform the world on the same subject without ever leaving home. Rape in the Congo or Haiti are viewed as a kind of strange pornography, allowing Americans to see themselves as superior, and others, usually black people, as inferior and inhuman.

Movies and jokes told by stand up comics elicit bizarre interest or laughs if the subject is rape behind bars. The horror of sexual assault is usually not considered amusing, unless it takes place in America’s prison industrial complex.

Talking about prison rape means acknowledging the full horror of this nation’s reliance on the prison system to keep some groups, black American’s in particular, in a place of ultimate control and subservience. The 2 million person prison population is fully one half black, a statistic which in and of itself ought to create outrage and protest.

It is right and proper to be angry that Omar Khadr, taken into custody as a minor and threatened with rape, should still be detained at Guantanamo. It is not right to focus on the Khadr case without also acknowledging the horrors inherent in the American prison system, the largest on earth. Nations openly scorned as backward and uncivilized have but a fraction of their populace behind bars. The self-described “land of the free” is anything but, with only 5 per cent of the world’s population and almost 25 per cent of the world’s prisoners.

Americans are not only at significant risk of sexual and other assaults in this country’s penal institutions. The majority of them face this risk without having committed a serious, violent crime. There are people living behind bars because they neglected to pay a bill. It is not illegal to owe a debt, but in some jurisdictions it is illegal to ignore a court summons issued because of that debt. Body attachments and bench warrants are issued for failure to pay medical bills, credit cards and child support, bringing back the debtors prisons of centuries ago. The lack of action on prison rape is even more egregious when the flimsiness of cause of incarceration is taken into account.

Apparently it is easier to take seriously the horrors inflicted upon women in the Congo without batting an eye at the plight of American women subject to sexual assault while in custody here at home. There is no need to soul search to ask questions about one’s own system if the persons in need of sympathy are far away. It is more difficult to question and to make demands on this nation, and to ponder the reasons why such brutality is permitted.

“Attorney General Eric Holder has already missed a deadline to begin implementation of policies that would reduce the frequency of prison sexual assault.”

The figures on prison rape were released as a result of congressional action taken in 2003, when George W. Bush was president and Republicans were in control of congress. The Prison Rape Elimination Act requires the Justice Department to implement and take action to stem this violence. Yet it is the Obama administration Justice Department which now drags its feet. Attorney General Eric Holder has already missed a deadline to begin implementation of policies that would reduce the frequency of prison sexual assault. Instead of addressing this issue as required by congress, Holder makes excuses and blandly states that he “regrets” not having his homework done on time.

The high rate of sexual assaults in prison are yet another example of American’s wilful ignorance of anything which might prove their nation to be criminal in its actions. America drops bombs, invades and occupies, and legalises torture yet other peoples are labeled as uncivilised and the criminal enablers see themselves as good and superior.

Jails and prisons are filled with the most vulnerable people and groups in society. It isn’t surprising that their vulnerability is so easily exploited but it should not be accepted and the chief law enforcement officer shouldn’t be allowed to put this issue on the back burner.

Perhaps Justice Department action will engender a wider debate about America’s judicial system. That would be a step in the right direction, but for now, the victims of prison sexual assault need justice, and their numbers need to decrease dramatically and quickly.