How racist is English football? 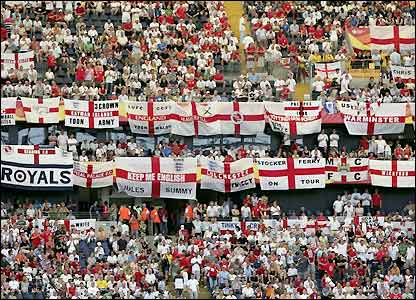 It hasn't been the best of weeks for Chelsea captain John Terry​, writes Barnaby Phillips.

It ended with him face down in the grass after a calamitous slip, allowing Arsenal's Robin Van Persie​ to glide elegantly past and score the vital goal in an absorbing London derby.

Arsenal supporters will relish that moment for a long time (and you might have guessed where my loyalties lie…) but John Terry's problems do not end there.

Terry, who is also the captain of the English national team, vigorously denies the allegation, and says he’s looking forward to clearing his name.

Two weeks ago, in another high profile case that is also being investigated by the FA, Manchester United​’s Patrice Evra​ said that Liverpool’s Luis Suarez repeatedly insulted him with a racist epithet during the match between the two giants of northern England.

Again, Suarez insists he is innocent. Together, these two incidents have caused some uncomfortable self-reflection in English football.

By and large, the assumption in this country is that there less racism in our game than in most other European leagues.

European crowds (those in Spain and Bulgaria are the most recent villains) often chant abuse at Black English players representing our national team.

In England, on the other hand, we like to think that we said good-bye to the banana throwing yobs back in the 1980s.

The English Premier League is crassly commercial, but it is also the most entertaining and cosmopolitan in the world.

Every weekend, millions of people in Africa, Asia and beyond sit down to watch it.

It doesn’t want to be associated with ugly prejudice. We’ll have to wait for the conclusion of the FA's investigation.

Many black players have spoken out in recent days and said that they don’t think there is widespread racism in English football.

But others have pointed to the mysterious absence of Black managers, and said that there are still problems to be addressed.

Prejudice, of course, can take many forms. This report in the Daily Mail says that although English Black players were shamefully abused in the match in Bulgaria in September, the English fans were themselves guilty of racist chanting about the Roma, or Gypsies.

I used to stand on the terraces and watch Arsenal in the 1980s. I don’t recall any anti-Black prejudice (perhaps because Arsenal had so many outstanding young Black players at the time) but there was certainly plenty of anti-Semitism.

Finally, here’s an absorbing article by the Black footballer, Rohan Ricketts​, (once of Tottenham Hotspur​, now of Shamrock Rovers) about the racist treatment he received in Thessaloniki, northern Greece, last week, and how he dealt with it.

*Barnaby Phillips is a reporter for Al Jazeera.