With inflation rampant and many basic goods in short supply, Venezuelans are furious at their government. Violence at protests in the Venezuelan capital, Caracas, turned deadly, and the country is in a deep political and economic crisis that shows no sign of abating. And this is much more than a sudden collapse: Venezuela was set on this disastrous course nearly a decade ago.

In December 2006, the then-president,

, won re-election by a hefty margin. Emboldened by his mandate, he proposed to abolish the constitution’s presidential term limits, which would allow him to run for re-election indefinitely. He put his proposal to the country in a referendum – and lost, albeit narrowly. Visibly furious, he cursed his opponents on TV and publicly threatened supporters who abstained.

But Chávez shouldn’t have been shocked. After being re-elected, his government dramatically cut several popular social programmes; his popularity duly went into decline, and his charisma, divisive language and strange TV show, Aló Presidente!, weren’t enough to reverse the trend. Without a dependable supply of petro-dollars, his socialist revolution was grinding to a halt.

Chávez refused to accept defeat. His government still controlled parliament, and a second referendum was duly approved for February 2009. This time framed as a “constitutional review”, it invited Venezuelans to abolish term limits not only for the presidency, but for all elected public offices. The party machinery was financially “gelled” to get all interests as invested as possible in the outcome, Chávez won.

With no term limits to worry about, and in spite of a cancer diagnosis, he stood for re-election again in October 2012. Rebranding some major social programmes as Gran Misiones and promising expanded state pensions, free property and more than 2.8m jobs – representing a 45 percent increase in that year’s national budget – he won with 55.07 percent of the vote. But once re-elected, he proceeded to keep a very low profile.

Two months or so after the election and clearly weakened by his cancer treatment, he announced that his doctors had found new malignant cells, and that he was returning to Havana for his fourth operation. He also announced that his vice-president, Nicolás Maduro, would succeed him should he prove unable to lead.

After months of speculation over his health and whereabouts, Chávez’s death was finally announced in March 2013, and Maduro took the helm. The new president inherited many of his predecessor’s signature practices, among them secrecy, misinformation, corruption and impunity. He also inherited a public growing tired of this behaviour.

Frustration and suspicion had begun to set in well before Chávez died. Many former supporters were angry at the lack of clear updates on the president’s health, and felt deceived about his ability to survive another term. Even the circumstances of his death are unclear: while the official story is that Chávez died in Venezuela on March 5 2013, there are claims he in fact died in Cuba on December 30 2012.

The frenzied week of national mourning that followed Chávez’s death became a springboard for Maduro’s presidential campaign, but when the next election took place in April 2013, it seemed the shine of Chávismo had worn off. The new president won by only a narrow margin, taking 50.61percent of the vote to Henrique Capriles’s 49.12 percent.

This was a highly controversial result. Maduro’s campaign was accused of abusing its political power for electoral advantage, and of illegally using state resources for political gain.

Capriles duly demanded a recount. The electoral commission, completely controlled by the government, agreed to conduct one, but only by checking electronic vote records and voting receipt slips, ignoring the manual log books that contained voters’ signatures. In other words, the recount didn’t look at the very evidence that would establish whether votes were genuine or fabricated.

Capriles derided the recount as a farce, but Maduro took power nonetheless – and the future of Chávismo began to look very uncertain. 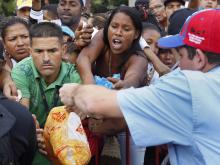 Much of this was down to the failing economy. Venezuelans found themselves living with one of the world’s worst inflation rates, and waiting hours in line to buy food, medicines and basic goods. Eventually the pressure became too much, and the opposition began to organise what became a mass protest movement.

Rather than listening to this anger, Maduro’s government clamped down. Without any credible evidence or an independent trial, it imprisoned key opposition leader Leopoldo López, along with opposition mayors and hundreds of students. Since the start of the protests, more than 40 people have been killed.

The Maduro government has lasted nearly four years by resorting to sheer authoritarianism. Loyal individuals now hold office in all the state’s institutions; the only branch of government not dominated is the National Assembly, where the opposition holds two-thirds of the seats. But the assembly’s efforts to call a referendum to revoke Maduro’s election have been successfully blocked, while state governor elections have been postponed to some as-yet-undeclared date in 2017.

Today, the government is still resisting calls to release political prisoners and hold a recall referendum that Maduro would probably lose. It has even ignored the pressure from the 14 countries of the Organisation of American States. The Chávistas know they’ve lost most of their core vote and exhausted their revolution’s credibility, propped up as it was by now-scarce petro-dollars and a deceased icon’s personal charisma.

So far, Maduro has survived. But there are signs he may finally have gone too far. The sympathetic Supreme Court recently went to the extreme of stripping the National Assembly of its legislative powers.

That move was too much for even Maduro’s loyal attorney general, who publicly called the ruling unconstitutional. Facing both insubordination in his ranks and international outrage, Maduro made a show of ordering the court to back down – but the assembly’s legislative powers are gone nonetheless, and his cynical gesture wasn’t enough to stop the unrest.

As hundreds of thousands of Venezuelans take to the streets in protest, fair and transparent elections seem like a distant prospect. After more than 17 years ruling a rich oil-exporting country, buying consciousness, and institutionalising a one-party system, the remaining Chávistas’ sole priority is political survival at any cost. They are sticking to the slogan Chávez borrowed and paraphrased from Fidel Castro: “Homeland, Socialism, or Death.”