Is a hung parliament bad? 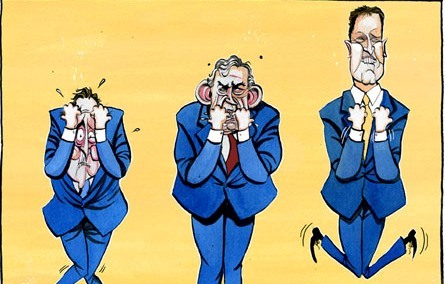 Much of the recent commentaries on the prospects of a hung parliament in the UK have warned that it would be unsuccessful for a number of reasons.

Firstly, that it might be a disaster for a nation with a deficit of 11.4 per cent of Gross Domestic Product (GDP) and secondly, that it will overturn and hinder quick decision-making within a two-party cabinet due to ideological wrangling.

The economy is a big topic for the parties prospective manifestos and therefore has done well to alarm the public against a hung parliament.

However, some finance experts have argued that on average 76 per cent of FTSE 100 revenues are generated from abroad, relying on international markets more than domestic affairs. Secondly that the economic policies of the two major parties are not significantly divergent.  Finally that  all parties will be forced to tackle any adverse reaction by the markets if adequate measures to reduce the deficit are not taken.

Yet no one knows what the outcome will look like if there is a hung parliament with the current demands and expectations from the public.

Do we really know if the Parliament will end up in complete  disagreement ? Possibly.

But also, would it be possible that a hung parliament can create an effective opposition by giving parliament the ability to hinder  bills such as the one that enabled  Blair’s war on Iraq? If there was a hung parliament during the 1997 elections where Labour had a landslide victory of 419 to 165 seats, would the whips been able to enforce the bill despite 132 MPs refusing to support Blair’s decision?

Would it be possible to overturn the ability of the Prime Minister using whips to enforce bills  despite a major opposition within its own party as it happened in 2004 with the Higher Education bill where it was passed with a slim margin of 5 votes after party whips swung 20 to 30 rebel votes?

Maybe then will there be a possibility to move away from theatrical question and answer charade within the parliament and a positive experience in our democracy?

Why Hanging Saddam Is Wrong