Celebrated British director Ken Loach’s latest film, I, Daniel Blake has received ample plaudits from critics the world over including the coveted 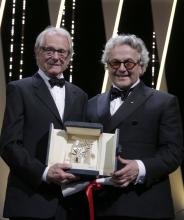 Generous praise has ranged from impassioned declarations of the film’s realism to cringe-worthy hyperbole (‘…It stands as a succinct and furious raging against the dying of the light...’ courtesy of the Cine Vue website) that sound like they’ve been lifted from Dead Poets Society.

Written by Paul Laverty, I, Daniel Blake is a heart-rending depiction of what it’s like to be trapped in the UK welfare system based on personal accounts both writer and director travelled the country to research. Some of these have informed the central story of an inter-generational friendship between struggling single mum Katie (Hayley Squires) and former carpenter, Daniel (Dave Johns) who has a potentially fatal heart condition that prevents him returning to work.

For anyone who has been caught in the increasingly farcical UK benefits maelstrom or volunteered with a Foodbank, there’s a doleful familiarity to I, Daniel Blake. The mostly non-professional cast add to the documentary-style verisimilitude as does stand-up comic Johns’ highly authentic performance.

Not all reviewers have responded positively. Some have complained that the film’s finale is too predictable. Loach counters that this is part of the dramatic tradition of tragedies; even if you can see the ending from the beginning, what matters is the journey the audience goes on to arrive there. The 80-year-old director quips ‘… [You] can probably guess the end of Hamlet 20 minutes in … [but] it’s [about] the process’.

One particularly uncharitable French review accuses Loach of repeating the same old formula, whilst offering no solutions to the problems presented. There’s something rather disingenuous about such comments and possibly says more about the critic’s political bias than the film’s shortcomings, perceived or otherwise. Artists are not policy makers. Their job is to hold a mirror up to society with the hope that, confronted with a reflection too ugly to bear, we are appalled enough to demand or –if we’re in the position to do so-make change.

That said. I, Daniel Blake is not completely free of flaws, minor as they are. There are a couple of down-and-out clichés this otherwise stirring feature could have done without.  With no intention of being insensitive to those who have faced a similar dilemma, Katie resorting to selling sex to make ends meet feels a little unoriginal, for example.

Nevertheless, as a piece of socio-political commentary, Loach’s film works on many levels.  For those oblivious to the current absurd state of the welfare system, it lifts the lid on how unjust it can be.  It gives the lie to Daily Mail generalisations about deceitful skivers, showing the plight of honest, hard-working individuals caught in the wheels of a system that has become even more overblown and distorted by austerity measures.

The film also dares to give a human face to those on the other side of the desk. Yes, Job Centre Plus advisors can be pedantic jobsworths but amongst them are the compassionate, who genuinely want to see their clients back on their feet.

On a relational level it is refreshing to see the purely paternal/filial dynamic between Dan and Katie. Once again departing from hackneyed mainstream movie tradition, Loach's film reinforces the message that romance need not be the highest expression of love.

This sobering and affecting critique of the contemporary British socio-economic landscape marks another watershed moment in the career of a feted director for whom art and social responsibility are forever intertwined.

*I, Daniel Blake - in cinemas across the UK now.