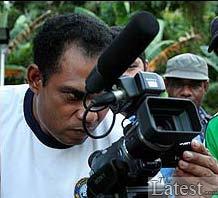 It has been left to the villagers themselves to expose the activities of the big companies doing illegal logging because Papua is inaccessible to outsiders and closed to journalists. Their dramatic footage has revealed to the world how the Indonesian province is being threatened by the wholesale destruction of its famed rain forests.

They were given digital camera equipment and taught how to use it by the London-based Environmental Investigation Agency (EIA), which investigates and exposes environmental and wildlife crime, working with the Jakarta-based NGO Telapak.

The two conservation groups have been working with tribal communities in Papua to help them protect their forests from unsustainable exploitation and illegal logging. A series of films released simultaneously in London and Jakarta, show the scale of destruction being caused to the forests which the villagers rely on almost entirely for food and shelter.

One was shot by the Mooi people who live in the Sorong regency of West Papua. It shows the relationship between the Mooi and their dependence on the forest lands and features undercover filming of logging. Once a stretch of forest has been stripped bare it is replaced with palm oil plantations but in the process much of the wildlife - pigs, deer and birds which the villagers rely on for food - is driven out.

The film questions whether the logging began even before a licence was granted for 32,000 hectares of Mooi land to be turned over for plantation in 2006. It shows workers clearing the ancient forests with chain saws before bulldozers move in to level it for palm trees to be planted.

Mooi women in the film say the destruction of vast swathes of their forest make it more difficult for them to continue with their traditional weaving crafts making household items and sleeping mats from tree bark. And tribal hunters say they now have to travel great distances to find game where previously it was abundant in their forests.

Another film shot in the Prafi plain, in the Arfak region of Manokwari regency in West Papua Province tells of the consequences of state-sponsored palm oil plantations. Senior community figures were sent by the government to Medan in Sumatra in 1982 to bring oil palm back to their area. The film shows the consequences to local people who lose their rights to the land and see it destroyed.

Promises that palm oil would sustain them for generations fail to materialise and the plantations fall into neglect as they become unprofitable. Villagers tell in the film how their rivers have been polluted by discharges of undiluted palm oil from a factory and how they develop rashes when they wash in it.

Ananias Muid, one of the villagers sent to learn about palm oil admits he now regrets the communities' involvement with it. Paul Redman, who has worked on projects for EIA in Indonesia for five years, said: "These are the voices of local people, the voices of the forest - explaining the issues that directly affect them and their lives. They are films made by Papuans, about Papua - they are the real thing. They were researched, written and filmed by them."

Some of the film-makers' identities have been kept secret because of security concerns. Redman explained: "These people have worked extremely hard to bring these films together, sometimes at great personal risk. For example, one film-maker waited for four days in the forest to get footage of illegal loggers. Logging is a multi-million pound industry which impacts upon where they live. For them, the forest is their supermarket - when it is gone they have nothing and no access to any income either. They want these stories to be told and these stories have to be told - without their land, they have no hope."

Bloggers in Russia forced to register with the state