I'm a vaquita, please help me 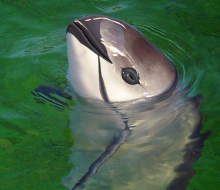 My name is Vaquita 97. Few people have heard of me and fewer people have seen me. In order for you to imagine me, I’ll say I look like a dolphin but smaller, I’m a marine porpoise.

Some say I could be a panda of the sea, because I have black circles around my eyes and my mouth, which, and forgive my boldness, makes me one of the most beautiful animals on the planet.

But I'm not here to talk about my beauty. My situation is critical because I belong to the world's most endangered marine mammals.

My habitat, the "Golfo de California," Mexico is increasingly dangerous for my species. For many years the area has been affected by illegal fishing and despite attempts to protect me, many of my friends and family have died trapped in fishing nets.

In just two years, half of the vaquitas have disappeared, now only 97 of us remain. If this continues, we could all disappear in three years, and I fear that the next one could be me.

Therefore I ask for your support to make everyone aware of my problem in order to protect me. I know many think it's impossible, but I am convinced that together we can achieve it.

I don't have a voice, however you have one and you can help me. With your signature you can pressure the Mexican government to protect my home and declare it a Marine Reserve to avoid my extinction. This will help protect the entire ecosystem of the area, and serve as an example to protect the oceans around the world.

I'm a vaquita, please help me